*I should be writing a real post, because I have things to say.  But frankly, I also have things to say for pay for PJMedia, and more importantly, I have a novel that I need to finish. So, I thought it was time for a little fun in our lives, and to remember it’s not just indie covers that can misfire horribly.  I do have a post on words in Mad Genius Club. If you can’t do without my writing, you know? -SAH*

Pulpy Things! by Julie Doornbos, a Blast From The Past From August 2015

Greetings! I’m Julie. I live on a mountain and do the art thing. And I have a thing for campy illustrations. Sarah has asked me to show you my embarrassingly huge collection of pulp fiction covers! You know you want to look.

I kid. Today’s post is (mostly) safe for work. So long as you work for yourself and/ or your boss can’t see what you’re browsing on the internet. I’ll leave the extra naked covers for another day. You’ll be fine!

For educational purposes [delicate-lady-snort], I’ve divided these into three categories. The first category needs no introduction, you know exactly what I’m talking about. 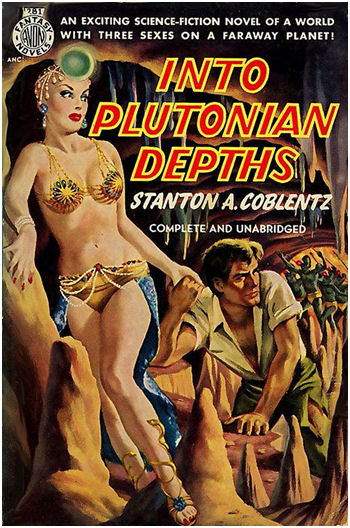 Plutonians, gold bikinis, AND three sexes? Well hell, that has nebula award written all over it.

Her: Mildly irritated to have a man fused inside her bathroom wall.
Him: Deeply disturbed by that sparkly pink shower curtain.

For just a moment, please ignore how completely awful these space suit designs are. You see their belly buttons? No?

That was done for decency sake. That little bit of covering is the difference between Space Ladies and Space Hussies, my friend. (just ask Jeannie…) 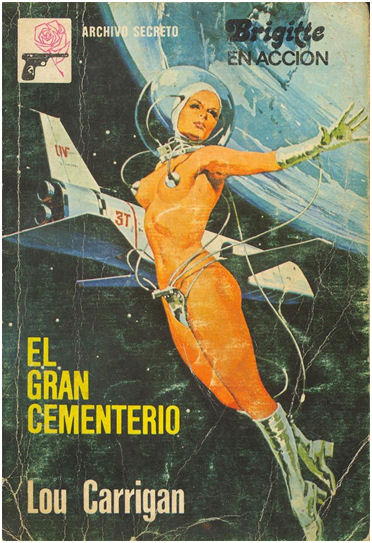 My favorite part about this cover?

The little blurb telling you that it is complete and unabridged.

Somewhere out there is a heavily edited version. It’s just slurp noises.

That bit of red drool on the monster and the woman’s neck means he deaded her.

Speaking of freaks, our next category is

This is the far more terrifying version of Harry and the Hendersons in which I burn the movie theater down and everyone thanks me for it.

Art DIrector: “The book is titled WHAT? Don’t we have something ominous and mostly naked we can put on the cover instead?” 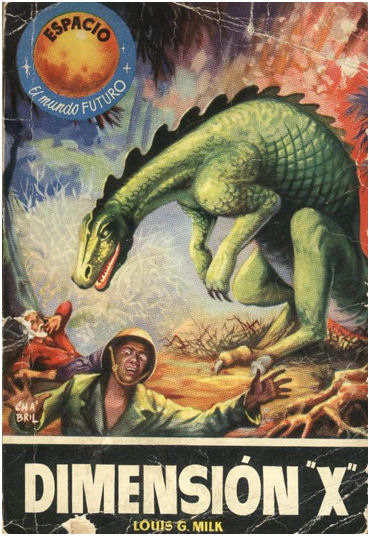 Somebody do something! That dinosaur is taunting Kenny Rogers!

I’m not exactly sure what’s going on, but I think they’re forcing her to listen to a dramatic presentation of Fifty Shades of Grey as read by Gilbert Gottfried. (I’m… just going to let you google that one.)

Somebody do something! That bear is spooning Richie Cunningham!

Which neatly brings us to our third category…

Covers With Men Being Attacked By Things

This category brought to you almost entirely by whoever was in charge of the covers for Man’s Life, True Men, Man’s Conquest, Stag, Man’s World, and the simply named Men magazine.

Attack crabs! (with bonus incorrect usage of the word “cannibal”) 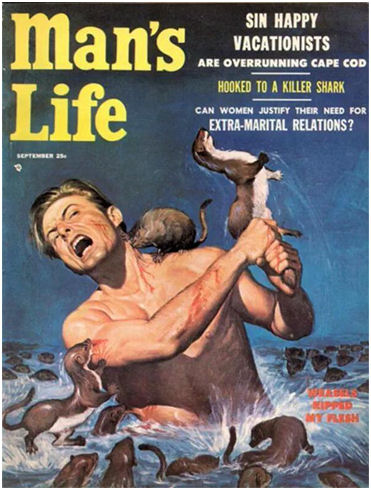 (and my favorite) Attack turtles! With bonus cleavage! 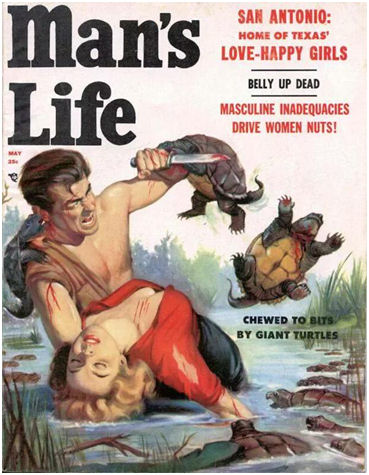 You didn’t think I was finished, did you? I told you my collection was huge.

“…and arsonists are my bread and shoplifters are my pickles and bank robbers are my condiments! It’s a whole crime sandwich!”

I wasn’t aware that the CIA was hiring teeny-boppers…

This is my horrified face. Moving along. 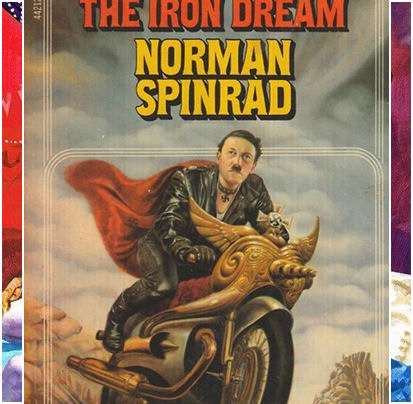 You laugh, but Spinrad was nominated for a Nebula for this.

You think I make this crap up, I know it. 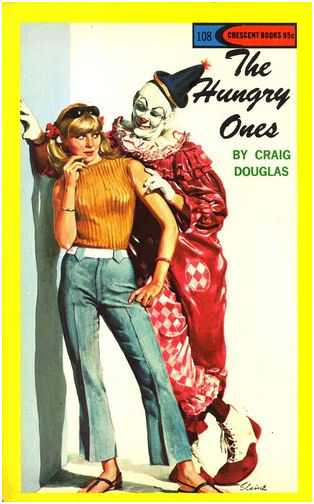 I think the author must have described the entire plot of his book out loud and then finished up with “do you think you can fit all of that on the cover?” and the illustrator was all like “yea, brah, I got this.”

That’s all for today! Next time Sarah leaves the door unlocked, I may sneak in here and show you my collection of sexy 80’s com-pew-turr ads. [I keep hoping she does, but she says she’s been too busy.  Busy, ah! She just wants to keep all the attack crabs for herself.  Wait, that came out wrong – SAH] 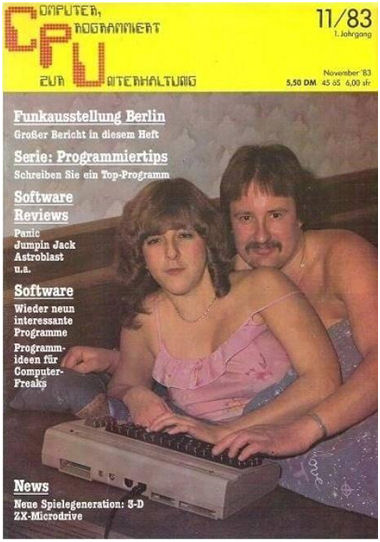 You only wish I was joking.

*You know guys, I think I should leave the door unlocked more often.  What say you?*

156 thoughts on “Pulpy Things! by Julie Doornbos, a Blast From The Past From August 2015”