*I thought this was worth rerunning, even if less than 2 years old, because we find ourselves casting from history on what will happen here, and it’s important to understand certain things: How different we are from other nations; how different this crisis is from crisis in the past; and, more importantly, how corrupt our understanding of the past is, because of our establishment’s corruption. Sure, those who fail to learn history are doomed to repeat it. But those who believe Marxist versions of history are doomed to be very surprised – SAH* 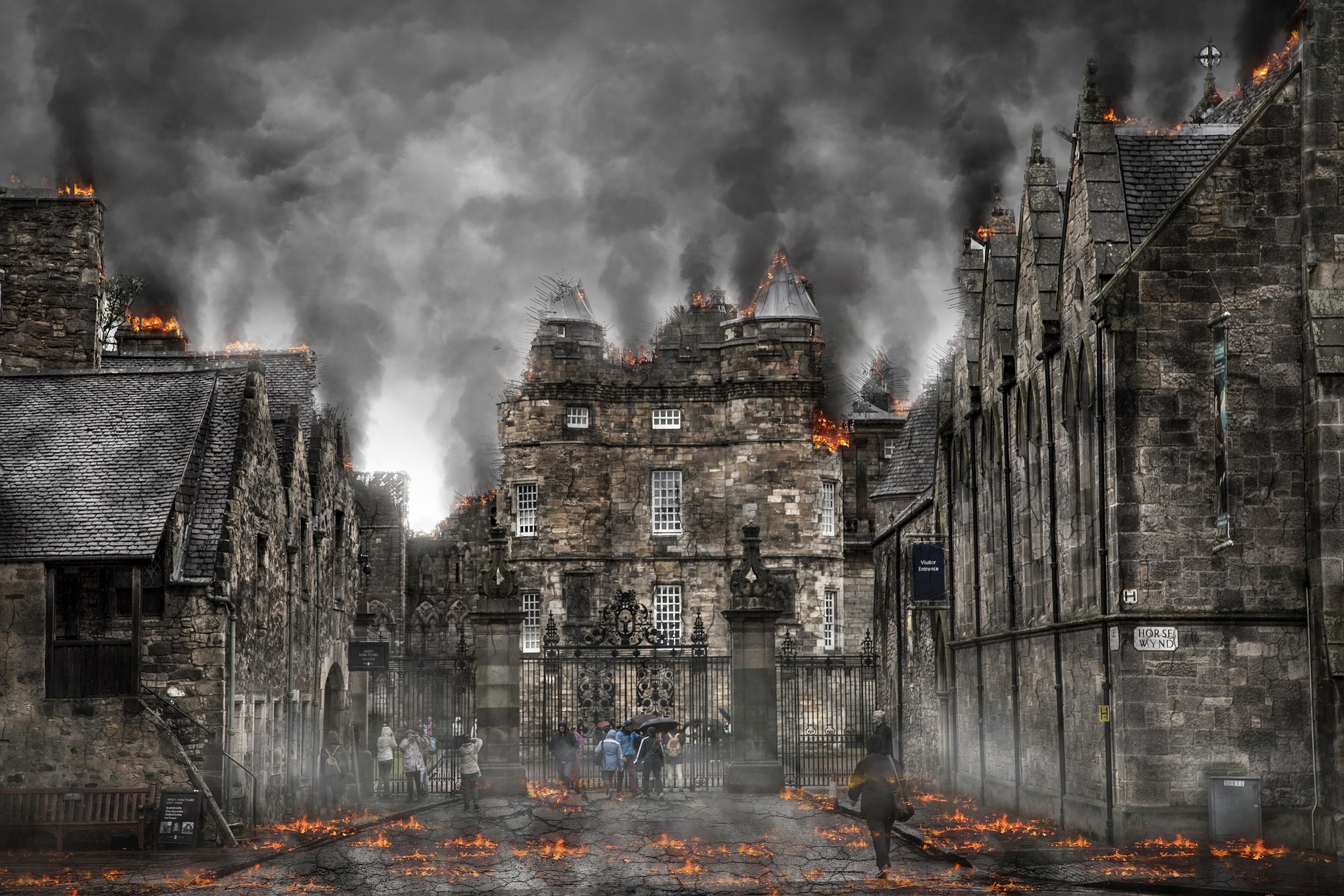 Having dealt with what I’m sure is yet the same troll in the comments, telling us that without Marxism the “upper classes” wouldn’t give a fig for the lower classes, world without end, connected with something that has been going on in my head all morning.

Anyway, this morning I was reading a book from a non-woke author who has been pounded in reviews for daring to tell the truth about pre-conquest Mexican history, and yet, in analyzing previous Mexican/indigenous societies he speaks repeatedly of “class warfare” and seems to think it’s a normal part of civilization.

Which made me pound my head repeatedly on the breakfast table.

Class warfare isn’t a thing. It was never a thing until Marx brought it to the vocabulary. Hell and damnation, it wasn’t even a thing in the French revolution.  No, I’m serious.

The French revolution wasn’t class warfare. Yes, aristo, aristo a la lanterne.  But what it actually was was the violent reorganization of a society whose ruling elite had become obsolete and unable to adapt to new economic circumstances, and also who refused to let society change normally.

Which I can completely understand is something that would make our current self-proclaimed ruling elites uncomfortable, since that’s exactly what they’re doing.

French aristocrats were often not the wealthiest people around. In fact, their means of wealth had been falling for over a century, and most of them were deeply indebted. What they had by law, though, was power over everyone BORN under them.  It wasn’t economic, but state power, ultimately.  And they not only refused to relinquish it, allow the bourgeois (often far wealthier) into their circles, but kept coming up with more and better ways to keep the “interlopers” out.

They were in fact doing what a lot of our soi disant “elites” are doing, trying to silence dissent and return to a way of life that hasn’t been normal or healthy for a century or so.  (The left’s ideal time is the 1930s for instance. Only with more sex stuff, and — in their heads but nor really since they’re now for straight up apartheid under the guise of safe spaces — racial integration.)

But it wasn’t “classes” in the sense that Marx preached them. It had nothing to do with wealth, income levels, or daily occupation. (The nobility QUITE lacked means of production, that being part of the problem, in the industrial age.)

It was more accurately castes: i.e. privileges given by the government depending on the condition of your birth.  Which, again, is what the left is trying to institute here.

Anyway, there has never been “class struggle” in any history ever, in the Marxist sense.  That was Marxist…. Well…. Marx was a high functioning autist and invented patterns even where they didn’t exist. And he wanted to plug in to the romantic ethos of the time and make the industrial revolution bad. So he came up with that load of fecal matter. It means nothing.

If you believe in Marxist “classes” and “Class warfare” and you’re not a leftist, kindly consider you’ve been profoundly mal-educated.

(If you are a leftist, you’ve also been profoundly mal-educated, but you like it, you believe in it, and by gum you’re going to wallow in it like a pig in muck.)

History could more accurately be described as a battle of memes.

Humans live not by bread alone. Regardless of how food and the other necessary goods of society are produced, that’s not what makes people happy/unhappy, etc.  It’s the story in their heads about the society and what makes it tick that counts. And the story always lags reality. And is often used for the rulers’ purposes.

Hence the romantics were an attempt to make life pre-industrial-revolution wonderful. And convince peasants living in rural submission was better.

At some point, though, the story breaks, when its fit to reality (it’s NEVER 100% because human life is fluid) becomes glaringly broken.  This is when revolutions happen.

For instance, it was easy for rural French peasants to groan under the oppression of the nobility, because there was a unified narrative that you were supposed to serve in the place you were born to. And because honestly, the noblemen were different enough so as to be another breed, almost.

It was when the industrial revolution advanced enough that there was a vast group of wealthy people who were told they were inferior “by reason of birth” that the wheels came off. Particularly as the bankrupt nobility tried to push them back into rural subjection.

In the case of the book I’m reading, he talked about pre-Mexican peasants rebelling against the priests who lived so much better, because class warfare.  This is not real. Or serious. It’s more likely they rebelled (we don’t know for sure, as we have no written accounts) because the priests failed in their role according to societal narrative.

I.e. they were supposed to keep bad things away, and didn’t.

In the same way the current covidiocy and intentional crash of the economy is an attempt to reverse the clock and to implant the narrative that “we’re all in this together” thereby giving the Marxist intelligentsia of the west control over the story in people’s heads.

“The heroic people and their heroic leaders defeated the virus with the power of government and therefore the government must have more power and narratives must come from the top and be unified.”

This is their preferred narrative. It leaks out with things like DeBolshevik wanting a ticker tape parade “when we defeat” the virus. Or their being really upset at Trump for not falling in line with “government is the way to defeat this” or imposing unified solutions from the top.

It’s not going to work. In fact, it’s hitting hardest those places they have full control of: Arts, entertainment, news, education–  What they’re actually doing is destroying their areas of power to gain power. Which is a ghost dance typical of what happens when an “elite” displaced by a change in circumstances which makes their story no longer fit tries to hold on to power.

The more they do, the more they flail around, the harder the fall will be.  Which frankly is scaring the shit out of me, as I think it’s going to be guillotines and terror. Not their fake attempts at terror, but the real one, where people Have.Had.Just.About.Enough and have no way to make the bullshit stop except a massive spasm of violence.

This is the way civilizations DO fall.

But the picture in everyone’s head right now is “classes” in “permanent war” which is an invention of Marx and has no contact with reality.

History is not permanent class warfare.  History IS permanent change.  And when the story in people’s heads doesn’t match the narrative, a time comes when it is reset VIOLENTLY.

The Marxist narrative was never right — which is why it brings death, starvation and destruction wherever it gets power — but it made sense to people in a regimented post-industrial world.  It also poisoned them for any practical solution, but hey, the ruling classes could USE it to get more power.  So it worked, after a fashion.

Only in the information age it doesn’t. And people are buying it less and less. And know all the ways in which it breaks.  But still retain fragments of it in their head. Which means as it falls apart, it will fall faster, harder and more violently.

The more it has penetrated everything and cued people for the wrong reaction, the more violent the outcome.

But screaming the story louder, or having seeded it everywhere doesn’t stop its fall. It just makes the fall more violent.

Reality is a bitch. It always wins.

And the current “elite” inability to understand that, or even to process that they are in fact in charge and not bold rebels (which their Marxist upbringing insists they are) is setting us up for a “blood to our ankles” situation.