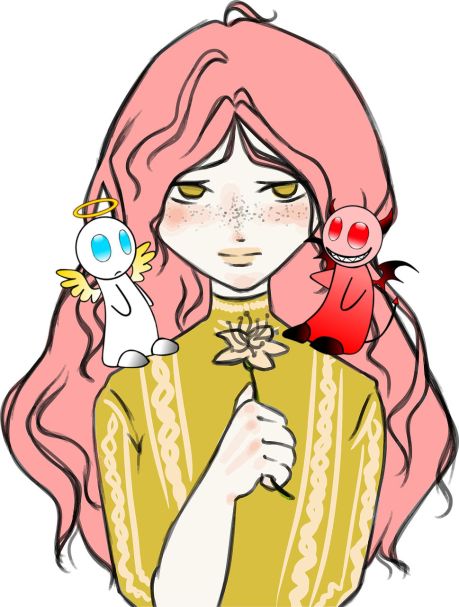 If you’re reading this, chances are you’re human.  (Unless you’re a minotaur, of course. This blog doesn’t discriminate on your percentage of human DNA. Like the owner could throw stones and all.)

Yesterday a friend asked a question, which has apparently been rocking right wing blogs and talk shows: “Is considering humans as inherently good a right or left thing?” I’d managed to miss it completely until a friend brought it up.

At which point, I rolled my eyes so hard they went under the sofa. And let me tell you that with Havey having now claimed me as his person (in his half -daft way.  I don’t know what instructions Greebo left him, but running over me, screaming starting at six am is NOT the way to get me up and writing.) those eyes were COVERED in fuzz.

Because the answer is “Yes, but it’s complicated.”

Sure, the left believes in the essential “innocence” of humans.  What it actually means is that, back there, at the beginning, they believe humans were born perfect and corrupted by society.  (Who has the time machine to go strangle J-J. Rousseau with his swaddling clothes, again?)

And the modern left believes a more elaborate lie, in which we are all born PERFECT and things like madness and crime only come in because of capitalism.  They have this entire Christian-heretical story according to which we lived once in a hunter gatherer paradise, where there was no private property and everyone had equal rights.

Then, the evil of greed and private property entered the world, and corrupted humans, so that men started exploiting women, people wanted to have “things” and everything went bad evil.

They base this, MOSTLY on their misinterpretation of primitive cultures and the remains of our most distant ancestors.  As in “Listen,paperskull, just because people didn’t have a ton of stuff, it doesn’t mean they didn’t cherish what they had.”  In fact, in some of the more primitive-living tribes, private property in the sense of un-needed and chance-come-by property, like charms or statues or whatever are very privately held and dearly loved.

This is why we find trade goods hundreds and sometimes thousands of miles away, in the graves of some of our ancestors.  IF you think that was some communally held property, you have more rocks in your head than the average progressive idiot.

In fact, some of the other great apes will fight over things they consider theirs. And if you’re going to say that’s because they were corrupted, you might want to consider that the only life for that won’t defend what is theirs is probably an ameba. And maybe not even then.  We just don’t know much about them.

Again poverty doesn’t mean “everything held in common.”  Yes,more primitive tribes have systems for sharing property and things you make. They are, arguably, responsible for some of the difficulty these tribes have crawling out of poverty, as they enable a system of crab bucket, where those who can’t or won’t do cannibalize the work and ingenuity of those that do.  In that sense, it is indeed primitive communism. But I wouldn’t brag about it.

At the same time, the left has this vision of humans as they are now as “no one is good and no one is clean.”  No, I don’t know how they reconcile it in their heads. I have a strong suspicion that they don’t reconcile anything in their heads, just receive it all, like open-mouthed guppies and don’t even chew as they swallow.  But let’s be charitable, maybe they think that capitalism — that all powerful idea you can own things and trade them… Wow, mind blown — has corrupted humans so far, that now all humans are tainted and evil.

This has some echo in their idea they can “fix”humans with “progressive” “education” (aka indoctrination) and various jiggerings of the way people live, trade and communicate.

So, they believe that humans are all evil, and everyone commits “crimes” and “evil” particularly those who get ahead/create anything/ are successful.  I.e. “no one gets ahead without breaking the law.”  I don’t know if they ever say that explicitly, but it’s obvious and implicit in all their art, writing and story telling.

But they also believe humans are INFINITELY perfectible by “education” — by which they mean making humans think and behave in a certain way.

This is solidly within the Marxist dream, where, after the dictatorship of the proletariat perfects us, the state will “wither away.”

Do I need to tell you they’re wrong?

The left believes they can write scripts for humans and humans will follow them blindly.  This can lead to a suspicion that leftists not only aren’t humans but have never met a single human.  I think it is more likely though that they are incredibly privileged humans of an intellectual bend. They grew up in stories, more than in the real world, and therefore believe the just-so story of Marxism.

And no amount of failure of their Procrustes bed of socialism/communism will convince them they were wrong.

So, do they believe humans are naturally good?  No, they believe humans were once naturally good, before evil-bad capitalism (think of it as a serpent) taught them to be bad, and now the only thing to do is “teach” (bully, arrest, cancel, beat) humans into perfection.  And hey, if most of them have to die along the way, is that too much to pay to bring paradise to Earth once again?

So, what about conservatives, (and for the purposes of this we’ll include Libertarians. What do they believe?) Do we believe that humans are naturally good?

Define good. Define human for that matter. And while we’re at it, let’s define everything else.  Okay, you don’t have time for that, so …. let’s table it for now, but remember it.

Most conservative/libertarians believe that most humans are as decent as they’re allowed to be.  Note “decent” not “good” which gets us into “whose idea of good.”

I.e. most humans can be trusted to look after their self interest best.

Wait, doesn’t that mean most humans will break the law and be criminals if you let them?

Well, no. The point is that in most cases the route to what humans want — which is some individual combination of status, family and stability — is easier if you don’t break the law.  In a sane society — say the one the founders intended (yeah, I know, now shut up) — breaking the law is the more expensive way to achieve that point.

And most humans, btw, do not want or aspire to unlimited power.  Yes, there are some. But most of us don’t.

Most of us, hell, don’t aspire to unlimited money or fame or whatever, either.

We (and by we I mean me and my friends. I don’t know about you tovarish) believe that humans are fundamentally self-interested, and have limits on all their impulses, from greed for money for greed for power.

This is obvious if you look around.  Go and look up your friends from childhood, for instance, and you’ll find yeah, some of them had a lot more potential, but weren’t willing to do the work. Some could have great families, but couldn’t be arsed, etc etc etc. But in the end, most people reach the level they are willing to pay for with sweat and tears (and occasionally blood.)

If they wanted more, they would work for it.

It is only when a system becomes fundamentally broken, like totalitarian societies, and progressives try to force a way of living — down to the least minute detail — on everyone, that humans become “naturally criminal.”

In fact, I think this idea that everyone is naturally evil-bad is the left’s long sustained scream at the fact that humans refuse to follow their scripts, and the tighter their script gets, the more we deviate.

The right? We believe if you leave people alone and impose only the minimal rules to make sure people with a raging thirst for power aren’t stomping on everyone else, and enforce them consistently, people are more or less decent. They mind their own business, and work and accumulate wealth to the level they wish, and then stop where they’re not willing to work any harder.

Now, we also believe all humans are fundamentally broken in some way, because, well, we’re in many ways jumped up social apes (I’m leaving out what I believe about the soul’s aspirations, because that’s based on stuff that is by nature unprovable) which means we have the impulses of social apes.  And those guys aren’t some kind of primitive and natural saint. All the sins of humanity are pre-figured in the physical form we inhabit, from murder to rape, from cannibalism to violence.  And so, those of us who aren’t extreme Libertarians know that most people are decent, but not everyone is some kind of noble savage or saint.  So, police is a necessary evil, to make the price of going off the rails expensive enough that just killing the neighbor and taking their stuff isn’t the lazy man’s way to riches.

In the same way, because nations are no more saintly than individuals, and because individual cultures tend to have their own agendas (whether the cultures are national or multi-national or tribal)we need a government, not just to regulate the administration of law, and prevent the police from going insane, but also to negotiate with other cultures/tribes/national and supra national entities.

Because government is essentially force, it’s very important to keep it out of the hands of those who believe humans are infinitely perfectible if ONLY government takes over every aspect of life, including how many squares of toilet paper you’re allowed to use for what purpose.

Because there is no faster way to turn everyone essentially evil than to make it impossible for them to subsist without taking things and hurting people.

So, the left believes we’re all meant to be noble savages. And is willing to commit all sorts of evil and violence to make us that again.

The right believes all of us have impulses and desires that are uh…. not noble at all savagery.  But the way to live in a functional society and prosper as a whole is to keep those under control.  Making it too socially expensive to hurt people and take their stuff can help make society on the whole, happy healthy and wise.

Yes, some individuals will fall through the cracks. That can’t be helped. You can’t make everyone happy and wealthy and contented.  Not without giving the savages in government so much power that all nobility, kindness and essential goodness is driven off and we’re all screaming apes, locked in a social hell.

So, yeah, depending on how you define it, (I told you we’d go back to definitions)  you can say either the left or the right believe in the essential goodness of humans.

But as usual, the devil — and the saving grace — are in the details.

210 thoughts on “The Nature of Humans”