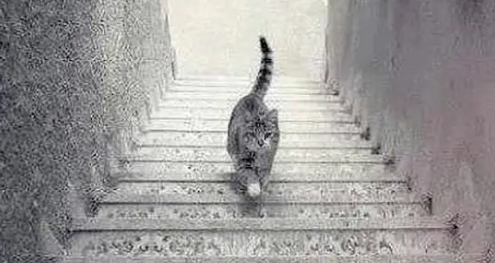 My mind works in a weird way, a statement that I’m sure has all of you amazed and confused 😛

My current audio book to listen to (I prefer books I’ve read before) while doing baseboard work is Starman Jones.

And yesterday I stopped just at the point where they’re going into a transition in space, and the stars look all weird, like they’re bunching up.

Later, in a group, a friend posted a thing about a book on the coming technocracy and how a few technocrats were set to control opinion and what everyone thought and felt, just like in 1984.

At which point, I realized the picture was all wrong and we were looking at it upside down and just as with optical illusions (click on the picture) when you see it, you can’t unsee it.  (My opinion, btw, as a long time owner of cats is that the cat is going up.  Those stairs look remarkably like Portuguese stone stairs, and that lip is not unusual in those. But that’s neither here nor there.)

Look, 1984 was an amazingly accurate picture of the future, if one looks at it from the point of view of mid-twentieth-century tech with some improvements.

To an extent, a few technocrats controlling opinion and dictating what was evil, or outside the pale is what we had till round about the mid nineties.

Yes, I can see how the illusion is fostered. We see media and technocrats, in the pocket and service of the left (partly due to “excellent” educations in Marxist higher education institutions, partly due to the fact that they still perceive leftism as a positional good — note that this is no longer NECESSARILY so and several positional good by mouthing lefty platitudes have backfired on entertainers and businesses recently. I can’t begin to tell you how shocking that would be in the mid nineties.) shutting down dissenting voices, and trying to enforce a single point of view.

We’re also going through an unfortunate period when a lot of the big online concerns are in effect monopolies.

And we tend to forget the de-facto monopoly of big newspapers and news and narrative fostered by those from early 20th century to the 90s or so. Hell, we tend to forget that all of mass communication and entertainment were controlled by a small group of people who all enforced strict opinion control and narrative, not as a conspiracy, but because they’d been brought to believe that “all smart/decent people believe x.” And the more unified the narrative, in blunt and subtle ways, the harder it was to be a dissenter.

I can honestly say those of us who arrived at dissenting positions went not through one, but through several dark nights of the soul while we examined and reexamined our assumptions.  And it usually involved living through something and seeing it drastically misrepresented by the unified narrative TM.

The narrative was all encompassing and inflexible, and trust me on this, even if you had a dissenting opinion you felt like you were utterly alone, and there was nowhere to turn.

This is how “nationalism” became the cause for WWI and II (instead of its kind of obviously being central planning and government control. And elites disconnected from the people.) This is how socialism became the unquestioned way of the future, and we all knew we’d run out of resources and life would go smaller and more bleak forever. Etc. etc. ad nauseum.

This splintered.  And yes, the big tech monopolies are trying tor rein it in.

Let me interject here that both things becoming monopolies and attempts at opinion control are old, old sins of the human breed.

It was happening with newspapers and TV too. It had already happened to radios. And let me talk to you about book publishers and their ever narrowing circle.

It is part of humanity to get in the habit of buying from a brand, or a type of thing.  My family used Tide and drove Fords for instance. It was a given. No argument.

And in the case, of say, Amazon, let me interject both as a writer and a reader, they make it way easier. It’s easier to put a book up with Amazon (though I swear they’re making it more complicated every month) and it’s easier to find something I wish to read with Amazon search than with any other online retailer.  This is before the advantages of the tiny new Kindles, which I can slip into a jeans pocket, and often do, because of my horrible fear of not having a book on hand while out.

However, things change. The monopolistic empire gets sloppy.  Amazon is already showing cracks in what used to be its gold-plated customer service. Publishers of old more or less committed suicide because they didn’t have enough competition and decided they could control what people wanted to read. Monopolistic newspaper empires were in real trouble before the net kicked them in or around the fracas.  And even all day news stations were losing credibility and viewers before the internet revealed most of them were just running fiction under the guise of news. (To be fair to them, so were most newspapers.)

What we’re seeing, and what makes it look so scary, though, is that it’s all accelerated.  It took almost a century for people to realize that newspapers had become monopolistic echo chambers. Now we’re seeing this in social media in decades.

But the thing to remember — the really important thing — is that once you look at the picture and see the old lady instead of the young woman, you can’t stop seeing the old lady. What’s seen can’t be unseen.

Yeah, they’re trying to stomp us out of existence online now.  With indifferent success, as we keep popping up elsewhere.

Because once we see it, it can’t be unseen. It just can’t.  And companies that try to control opinion, just end up destroying themselves.

Look, the total control, the all seeing and encompassing state was a creature of mass production and what Sabrina Chase delicately calls “the entertainment-information mass industrial complex.”

They’re awkward and wrongfooted in this new climate/this new technology.

What they’re engaged in, from the mass arrest of Winnie the Flu to the mass insanity of riots for nothing over things that had already been resolved, are attempts to regain the saddle.

And they succeeded, beyond my expectation at least, with Winnie the Flu, though I note that every day I see fewer panicked eyes in the grocery store.  Panic seems to linger harder in Europe — which makes sense, the blog revolution never happened there, and I can’t even explain why — but here every day it fades a little, despite their countervailing efforts.

You see, the entire mass arrest was designed not just to crash the economy, but to recover the glory days post-9-11 when we spent all day every day in front of a news channel, to find out what would happen next.  Because people weren’t going out at all, and were cut off from normal interaction, it worked. A lot of them were watching tv and day and even sensible people were buying the nonsense. (And it’s going to take a while to dismount, because people hate admitting they were wrong.)

But their victories come at increasingly high prices these days.  Their clever-fool mass arrest (to be fair, the initial one might have been the result of faulty information and panic, but the prolongation was definitely idiots enjoying power) gained them an audience, and “experts” who cavorted and writhed with pleasure in the limelight while helping cause panic.

What it cost them….  Well, I will be blunt, right here: I don’t think any of the traditional publishers will be extant in 5 years, and I’d be amazed if they’re extant in 3.  Their being owned by European conglomerates, they’ll probably survive, but the question is, when do they cut the American branch off?

Universities?  You have no idea.  If I had money right now, I’d be starting an online consortium that educates in real skills, people really will need, from basic “How to deal with your computer” to writing clear sentences, to–

Yeah, this will need money, because as of right now you need accreditation.  This will change.

Mothers and fathers working from home will be less likely to rent their kids minds wholesale to the poisoned education establishment.

The list goes on and on.  Including cities losing both population and power in the next decade or two.

It’s at best a Pyrrhic victory.  Who was it who said, “Would that we could sell them many such victories at such a price.”

Guys, I’ve read history. Any big transition caused by a complete change in tech is bad news, particularly so when accelerated. I can’t think of any that didn’t get a butcher’s bill.

But don’t look at it the wrong way. Things are not going towards 1984, but away from it.  The vile crap we’re seeing is not new. It’s always been there, but it used to be easier for the left to hide.

Once you see the picture, you can’t unsee it.

It’s possible none of us will live to see a time of greater freedom and individualism, but our grandkids will.  It’s going that way.

Yeah, things are going to get very, very bad.  The left loses a mile for every yard they gain, but they too still believe the future will them, and the saddle is right there, and if they just cut the horse’s legs, they’ll get on top again.

And I know it’s hard not to be afraid. But remember, they’re the ones who are afraid. They have reason to.

You, out there, be not afraid.  Lift that torch. Let others see.