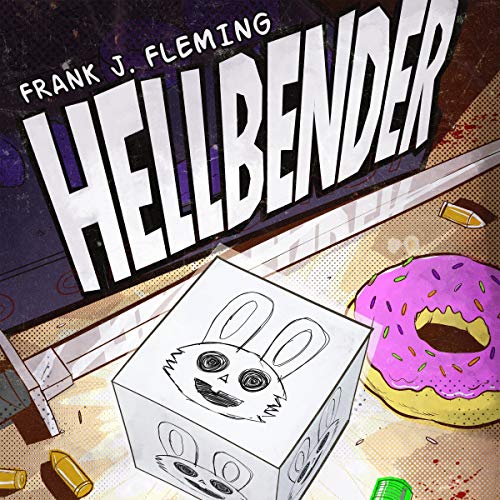 Book Marketing and a Contest – by Frank J. Fleming!

It’s me, Frank J. Fleming, novelist, IMAO founder and sometimes blogger, and writer for the Babylon Bee. I’m very famous and you’ve heard of me. My hilarious new novel Hellbender is now out on audiobook, so I thought I’d talk about the most important part of writing: marketing.

It doesn’t matter how good a writer you are, no one is going to read you if you can’t market your book. In fact, if you’re really, really good at marketing, you don’t even need to be good at writing. Really, I’d just forget about good writing — go ahead and
pound at the keyboard like a chimp to fill up a book — and then concentrate on marketing. Once you have a reader’s money, who cares if they like the book? It’s too late; you’re gone.

So here are some of my favorite marketing strategies:

One of the most common methods of marketing is word of mouth. Now you’re probably wondering, why the mouth? Well, it’s the best thing at forming words. Word of nose? No one is going to understand that. Word of ear? That doesn’t even make sense. Word of butt? That will actually hurt sales. So when you have words being said about your book, you want them — and I can’t stress this enough — coming out of a mouth.

This is one of my most common strategies. All you do is keep telling people over and over, “Hey, you should buy my new book!” until they absolutely hate you and want you to stop. But the only way you’re going to stop is if they buy your book. Though they might
also attack you. That’s another option. Usually, they’ll settle on just buying your book, but as a warning, you are going to get roughed up a bit with this strategy.

This is a pretty tried and true method you can adapt to any situation. For instance, I tried to get someone to buy Hellbender and he was like, “Wait. Is that a science fiction comedy? I only read true crime books.”

So I said, “That’s what it is. True crime. Maybe the truest crime ever. And extra crimey.”

And then when he bought it and flipped through it and was like, “This looks like it was written by a chimp pouding at a keyboard!” I was all, “No refunds!”

Lying is great. You can also use it to make whatever you’re selling sound better than it is, though I don’t need that for Hellbender, since it has already won five Nobel prizes in literature and is in the Guinness Book of World Records for being the greatest novel
ever.

I know. You’re probably rolling your eyes at this old-fashioned technique. In this age of targeted ads and A/B testing, why would you use anything as low-tech as pet kidnapping? But if you read any marketing book, the very first thing it will say is “People
love their pets and will buy almost anything to keep them from being harmed.” That’s why kidnapping people’s pets and threatening not to give them back unless they buy your book works even in our futuristic age of Facebook, jet packs, and digital watches.

Despite all your marketing, people will still just want to get things for free. Grr. I despise consumers; all I want is their money and they constantly don’t want to give it to me.

Still, you can use people’s desire to get things for free to help market your book by having a contest. You lure people in with their wanting free stuff but most won’t win the contest, and now they’ll want your book but will have to pay money for it. It’s the most
evil of traps.

Anyway, here’s a contest! I’ll give out five copies of the Hellbender audiobook to the five people who put the best marketing ideas in the comments. So come up with a great marketing idea — one that will help me sell at least a million copies [or I bet make him laugh himself silly!-SAH] — and put it in the comments, and a free copy of Hellbender could be yours.

But if you don’t win, you can just buy it and pretend you won. It will make you feel better.

168 thoughts on “Book Marketing and a Contest – by Frank J. Fleming!”