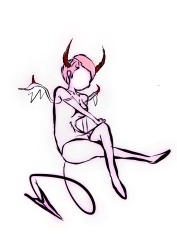 *I hate the fact I slept very badly, but I’ve been meaning to reprint this post, anyway- SAH*

This is the part of the blog when we reclaim words.  The word I want to reclaim here is “hate.”

Look, I hate my hair today — Sunday —  and I hated the way I felt this morning, with a sore throat and headache.  And I hated having to run first thing in the morning, but I did it in the hopes it would set things right which it didn’t.  So, I’ve sat here through all of Sunday, feeling like a lump and hating it.

All of which is utterly wrong.  Hate as I understand it is as absorbing, as all-powerful, as charged an emotion as love.  People throughout history have had loves and hates.  And just as they wished to achieve bliss with/for their loved ones (depending on the type of love) they wished to DESTROY those they hate.

“Peace, I hate the very word, as I hate Hell, all Montagues and Thee” – Montagues and Capulets are all about the unreasoning hatred: strong all consuming, absorbing, and will be led by it inexorably to destroy or be destroyed.

Hate is a great emotion to use in a book, because it’s big, red and pulsing.  (Stop giggling.  Don’t make me come out there.)  It’s an all or nothing sort of emotion.  Of course, if that’s the only emotion you use in your book, it will be a diminished book.  As Agatha Christie said of Elsa Dittisham in Murder In Retrospect (aka Five Little Pigs) if all you know is hate and love, you’re not quite grown up.  Grown up human beings know emotions with more shadings.

I wonder what it means about us as a society that we’re now all “hate” or “love”?  Is it a result of that delayed adulthood that has been referenced here by various commenters?  Or the result of our being, more than any other society in the past, a society permeated by entertainment and story?  It’s not just that on the page emotions must be bigger than they’d be in real life – the same effect applies on screen, where most people experience their story telling and through which most people absorb their idea of how the world and human interaction should be.

I will confess right now that I have an odd relationship with visual entertainment.  I view it only as a palliative to the extreme boredom of a repetitive task that doesn’t engage my visual attention.  Blame it on my parents, who didn’t get a TV till I was 8, or perhaps on a genetic disposition, who knows.  (It’s a war wound, g’venor.  I took an arrow to the knee.)  So I can go for years without watching TV and then, either because some monumental task looms (usually ironing, which can go on for DAYS) or because I’m sick with the flu or something (the type of illness where one doesn’t feel like working but is tired of sleeping) I end up in front of the TV for a week or so, and catch up on years of potential watching (thank you Amazon Prime and Hulu.)

So, I have seen soap operas maybe twice in my life, and the second time shocked me more than the first.  The first time was when I was very new to the US and everything was strange.  The next time was ten years later, while talking to someone who had a soap opera on – and at that time what hit me was how odd the acting was.

I don’t know if any of you have thought of this, but Shakespeare, to feel “right” must be played at a frantic, exaggerated pace.  Then it matches the words and the emotions.  Well, I don’t know if you’ve ever noticed, but words, gestures and even voice level, Soap Opera makes Shakespeare look as stayed as a whisper while sitting in church.

I suspect, though I haven’t watched soap operas again to check, that some of that acting style has migrated to sitcoms and other shows.  (Of course, I only very occasionally watch those, either, but I seem to remember some joke about the exaggerated expressions of the lead actor in CSI Miami.)

And I suspect, raised on shows, with that acting permeating our consciousness to a level never before experienced in history, we’ve slid the scale right up.

Did I spend the day thinking how much I hated my hair?  Do I experience for my hair one of those emotions that will destroy one or the other of us?

Uh…  No.  I got up in the morning and was disappointed with how limp and odd it looked, and my attempts with a curling iron were fruitless and since I felt blah, I went “whatever.”  That’s the extent of my grand passion for my hair.

As with a lot of things I’d say I hated – beans, I hate… wait.  I might actually hate beans.  I just lack the ability to eradicate them from the world, and I’m aware innocent people would die if they disappeared, since they’re the diet base of various other American countries and I hear an excellent (if repulsive) source of protein. – I don’t actually hate them.  I dislike them.  They pain me.  They annoy me.

I don’t hate being stuck in traffic – it annoys me, though and puts me out of temper.  I didn’t hate the woman ahead of me on a one lane road, putting on her makeup and pressing the brake erratically.  Even if both of us stopped and I got out, I wouldn’t want to fight her to the death.  I might scream impolite things at her and tell her to stop being an idiot, but I never even got close enough to anger to want to slap her, much less kill her.  And once I was out from behind her (every single day on my way out of Manitou to drop the kids of at the school in Colorado Springs, the last year we lived in Manitou, why?) I didn’t think about her the rest of the day.  And now, ten years later, I remember her idiocy, but not her name, or even the color of her hair.  I don’t wish her ill.  I just wish someone would have taken her mascara wand away.

Are there things and people I hate?  I’m not sure.  Those people and things that put my family in danger, I dislike very intensely, but I don’t think I want to destroy them, just to stop them doing what they do.  Yes, in some cases that might mean killing them, in which case it must be done without regret or hesitation, but also, probably without hate.  Because in real life, you can see the motives of even the worst of people and with very rare exceptions, they’re not ALL evil.  (And on those rare exceptions, we tend to assume they’re crazy.  Which is silly, but it means they’ve gone that far beyond our scope.)

I don’t think I’m a particularly nice person.  And I don’t think I’m that unusual.  I don’t think most people go around consumed with hates and unreasoning passions that demand either they self-destruct or destruct the object of their obsessive negative passion.

A few, perhaps, (And not really) but if you think about it, most of the people you know who could genuinely be said to hate someone aren’t people at all.  They’re characters in books or movies.  (And often – Shakespeare excepted – though note even in Romeo and Juliet that’s not the moving force of the main characters, rather of the secondary characters (or perhaps it is a secondary character) – hatred is put in there as a cop out, an easy way to plotting, a way to cram a whole story in an hour with commercial breaks.  “He hated her that much” or worse “he hated some group or other” is the plot equivalent of “and then he went mad and murdered a multitude.)

Is this a problem?  To an extent, though it’s more a reflection of an issue brought on by technology – the prevalence of make-believe stories, emotions and motives in our lives to an extent our ancestors didn’t know – than the cause of the problem.

It only worries me when we use it to close discussion.  Like the commenter who said I hated him, or something of the sort.  (How absurd.  I still don’t hate him, even though he apparently lives under a bridge.  I don’t know him well enough to hate him.  His comments annoyed me, and I blocked him.  I’m not sitting here plotting his death, not even fictionally.)  At the time he said I hated him and was projecting, he was commenting for the first time, and I’d said nothing about hating anyone (well, not in that post.)

I do hate Marxism.  I hate it out of reasoned study.  And I’m ready to explain why I hate it – beyond the death and misery it always brings in its wake. It’s because before it destroys it maims the human spirit, and leaves behind trendrils that might take generations to clean up.

And it worries me that, like the Christie character, we’ve become able to understand only the big emotions, and not the smaller, more shaded ones. This hate and love, and calling others “haters” if they disagree with us (a favorite trick of the left, as are the various ists they accuse us of being)aren’t real. They’re just a tantrum. Having to respond to the tantrum in terms that penetrate means we also abuse words.

This ridiculous quarrel makes us all, even those of us playing defensive, emotional toddlers, carrying in on in a global nursery.

Like all toddler tantrums it will end in tears.

How do we become grown ups? I don’t know. But it starts with reclaiming words.

Are there humans I hate? Well, there are politicians and corruptions of our journalistic profession I despise. Hate?  I hate their actions. I spend a lot of time figuring how to erase those actions. But not how to destroy or kill the people who did them. Because I don’t hate them. I’m just intensely annoyed by them.

I’d like to give them a piece of my mind, not to plunge a dagger in their hearts.

I hate communism (As I hate hell….), but I strongly dislike the way I’m rambling on, seemingly unable to close this post.  I blame it on the slight fever and the headache.  Which truly bothers me. And I hate it. Because I want it to be over.