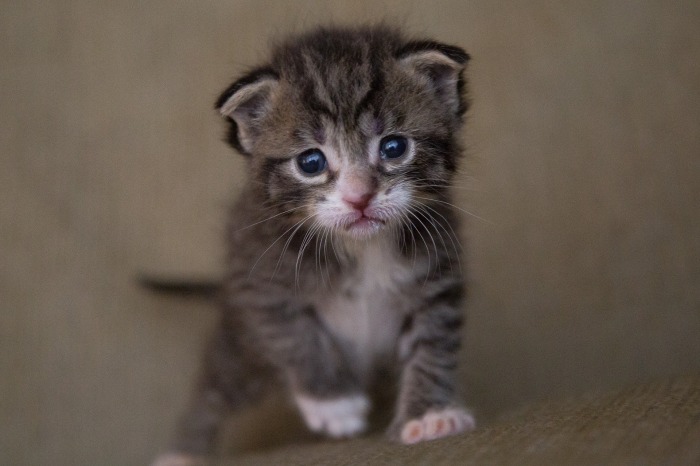 Cats are more sensitive to noise than we are.  When I was doing work with orphan kittens — most of your local shelters will take kittens any age.  Most euthanize those under 8 weeks of age, which most state laws view as being too young to adopt.  Some people like me volunteer to raise litters to 8 weeks of age, which is often 7 week stints of having infants, with all that entails.  As my health got worse, I stopped doing it, so I haven’t done it in close to ten years.  Might do it again, when some of our feline geriatrics go to their reward — one of the women in our support group said she’d been delivered a 2 week old kitten who was in shock.  Someone had transported him in a tin bucket (lined with warm towels, mind) on the handle bar of a motorcycle.  The person doing it, had found an almost-dead kitten, wanted to take him to a rescuer, and had not idea their hearing is far more acute than ours.  (The kitten survived, btw.)

Posit a kitten whose mom gave birth under some piece of industrial machinery, with all the noise and clanging.  If he doesn’t go deaf, he might adapt to a quiet life, as an adult, but he’ll probably still deal better with chaos and confusion than your average cat.

In a way I am this kitten.  Due to things too hard to relate, and besides not mine to tell, things were already semi-unpredictable before the revolution.  They hit full potato after in that I couldn’t predict what would be next.  Like…School could start 1st or October or… whenever.  One year it was January.  Our curriculum was not what my brother and father had studied, not even in vague outlines. It could change, for that matter, at any time during the year, both courses (in Portugal you don’t select them.  You get them per-school year) and what courses taught.  Your commute home could be fine, or there could be a sudden strike, and you had to walk home (if it was both bus and trains on strike.)

There was no rhythm, no pattern, no pathway to adulthood.

And then when things were stabilizing, both in the country and in my life, I moved overseas.  It took me a while to realize all my assumptions — and therefore most of my actions — about how things worked were plain wrong.  I’m sure there are some minor things I haven’t figured out yet, because they’re internalized when people are pre-verbal.

Though my new environment didn’t contain surprise strikes, or pitched street battles when you least expected them, it was completely unpredictable TO ME.  (My misreading of real estate cost us dearly in our first house.  But I came from a country where you bought a tiny home and it grew with you and you stayed there for life.)

Then we moved… well more or less every five years for the last thirty.  We stayed in last house 13 years because most of it I felt too ill to move. But then we had six moves in a year and a half (some of them partial, some kids, but still disruptions.)

I’m as “adapted” as our kind can be to disruption and chaos.  Which is still not very well.  I still feel confused and upset when I can’t predict what  the best path is, when I can’t make the “noise” and confusion stop.

Most people want tomorrow to be a little better than today, but not markedly different.  They want to raise fat babies and fat, happy grandbabies, and predict what gets them there.

They get downright testy when the path to get there keeps changing and they have no clue where to go or what to do to get to that happy outcome.

Right now our disruption is mainly technical.  “Mainly” but it soon flows out to the rest of the world.  The French Revolution and probably WWI were convulsions from the big tech change of the industrial revolution.  Because when people are unstable, things go nuts.

And we’re at the beginning of such a period.  On and on it goes, where it stops nobody knows, but hell, the last echoes will probably resound 500 years from now, particularly if things keep changing.

Which means people are getting — to coin a phrase — their cheese moved all the time: jobs, politics, expectations, ways “things have always been done” within jobs and families. The inevitable is no longer inevitable.  The impossible and unthinkable might be improbable, but they do happen.  “Things fall apart.  The center cannot hold.”

I’m not better at this than anyone else.  I dearly love security and predictability, I just think a little clearer through the mess, because I’m the kitten who grew up in the machine shop.

So — some things I know you might want to think about:

1- You’re not crazy.  You just feel that way.  Our brains are wired for the neolithic (if that.)  We don’t do well with fast changing situations.

2- Most of the anxiety you feel is not real.  Look, when you were a neolithic farmer, and a lot of things started changing, it was sure as shooting some bad invaders would raid your farm one night.  So you had to be alert and paranoid all the time.
Sure.  I don’t want you to do things like ignoring your surroundings, but I also don’t want you to die of stress.  Take a deep breath.  Yeah, it’s crazy, but you don’t believe in a deterministic future and the inevitable arrow of history.  Your world is being rocked, but not jack-hammered into the ground.  Chances are good you’ll be fine.  You got this.

3- Our friends and neighbors who believe in a deterministic future and the inevitable arrow of history?  Their world is getting jackhammered.  Worse, their ways of reacting that always served them well are doing worse than backfiring.  They’re not doing anything.  Worse, they’re used to being in power, and in having “privilege” for having “the correct opinions.”  That’s not really paying off anymore.  Even in publishing where the establishment abides, there’s less and less cheese to go around, which means the other rats are turning on you.
I’m not saying you should pity them.  Oh, heck, you should, yes, but considering what has gone on in the past, most of us aren’t that saintly.
Just understand the crazy stuff they do and say is because they lost their moorings, not because “they were always inherently bad people.”  (Though some, of course, were.  People will be people.)  They’re really really scared, and scared people do crazy stuff.

4- So, you, stop being scared.  Yes, there’s a possibility this all goes to buckets of blood, but I can guarantee those who see a boot stomping on a human face forever in our future are not taking in account a bazillion factors.  That type of thing works in fiction.  Reality is more complex and frankly the boots haven’t been permanently successful anywhere, even the parts with the worst record in that regard in human history.
Take a deep breath.  Half of what you’re feeling is due to perceived chaos and instability and the people for whom the chaos and instability threaten fundamental beliefs.  You’ve got this.  Most of us will be fine.

5- This is no time to run around with your head on fire. Conversely it’s no time for a nice nap either.  Roughly half the population (not all of them hard left, or even left) is out of their minds with panic.  Roughly 90% are somewhat scared. All over the civilized world and some of the semi-civilized.  Scared people do crazy things.  Be aware of your surroundings, particularly when traveling abroad, but in our fair land, too. Have a plan of escape/survival if things go strange, at all times. Just don’t obsess on it.  Having the plan will help you feel less anxious, and increase your chances of survival should things go wrong.  Think of it as the spiel on emergencies when you board a plane.  Chances are things will be fine where you are, at that time.  But there will be rough patches. To survive the rough patches, your back brain needs to know what to do.

6- Think about the specific change around you and in your field.  The way changes are trending is not always obvious — in publishing right now I swear things change every six months — but they can be guessed if you think about it.  Nothing trad pub has done so far has really surprised me (except perhaps for how long they’re taking on the way down, but I know non-fic is still profitable, and there’s parent companies and stuff.  So my surmise of how fast it would all go South has always been broad “two to ten years” say.) Some turns Indie has taken have shocked me because they’re due to Amazon changes, and I can’t anticipate those.
You don’t have to foresee ten years in the future, and thank heavens, no one needs to foresee 100 (unless you’re an immortal.) Even science fiction is less forecasting than “what would be cool” and “what would make my story more fun” and then finding a plausible way to get there.
BUT if you’re a few months ahead of the rest of your field, your town, your business, you’ll do very well.  It’s like surfing on the crest of change, without getting pulled under.

7- That’s it.  Take a deep breath.  You’ll do fine.  You got this.  Reports of our demise are greatly exaggerated.  Be not afraid.

286 thoughts on “I Feel The Ground Shifting”