I could be in a better mood today, I could.

I’m not. To begin with my husband has shared his cold caught at comicon. This (probably) combined with working at the other house with paint fumes and such has caused my arms to erupt in an attack of eczema like none in years – for those who don’t know what that looks like, it looks like I have third degree burns all over my arms.

This morning over breakfast, I opened a medieval mystery which I bought because it was only 99c and to which the author (of a long running, traditionally published series) has thought it fit to append a ten page foreword going on and on and on about how there was “progressive” thought in the middle ages. (And she clearly thought “progressive” was an undiluted good thing, the exegesis towards which all our thought and feeling should trend.)

In itemizing the “blind spots” of our time, she mentions the McCarthy campaign as hunting “heretics” (Or, you know, as Heinlein said, enemy agents in war time.) However there is no mention of the climate in our campuses, academia or literary houses, not to mention art and social life, where the expression of less than enthusiasm for “progressive” politics gets you called names and accused of horrible crimes.

I decided when it came to blind spots the author needs to remove the beam from her own eye, before she starts talking. Also she needs to consider the wisdom of such a blind-side lecture on her ideas of history (no, really, she goes into a long ramble on homosexuality in the middle ages which might or might not be germane to the book, since I haven’t got to the book yet. Also, as someone who has read about the same topic, her view of it is a little limited. “Medieval” and “Europe” are very broad brushes and treatment of minorities – sexual or other – varied greatly depending on where you were and when.)

At various points on this blog, I’ve mentioned whisper campaigns about conservative or even non-openly-leftist authors which once upon a time impaired their careers. More lately I mentioned the horrible things said about the Sad Puppy supporter and nominees, the accusations of “racism, sexism, homophobia” emanating from the anti-puppy side, first enshrined in the Entertainment Weekly article which got gutted when they realized they were treading thin legal waters, and then blithely repeated by everyone on that side without paying any attention to rebuttals.

I also mentioned there had been threats – by two well known authors (no, I’m not naming them, but commenters can) – one of which told Brad he’d never win a Hugo ever ever ever, and the other who went on at length on another colleague’s blog post about how everyone involved in this “will soon be looking for work.” I.e. “you join that side, you’ll never work in this town again.”

File 770 not only sent someone over to ask about examples of these threats (look, the commenters can provide them if they wish, but I’m not responding to “let’s you and him fight” strategies) but apparently the commenters went on about my “paranoia” in claiming these threats.

This was particularly funny considering how I ended that post – by reminding them they can no longer hold us back. Should they prevail on my publisher to stop publishing me, my income will probably go UP, judging by my first foray into indie, with an admittedly odd book. AND if I choose to go traditional, in this day and age it’s not precisely hard to start anew as a completely different author and create a background on line so they never know. Look at the exploits of Requires Hate and the fact they had no clue who she really was, or all her sock puppets.

I wasn’t being paranoid. I was laughing at their threats, because in fact they control nothing.

However, let’s be clear: mud sticks. Get something associated with unspeakable sins like “racism, sexism, homophobia” and the idiots will go on repeating it forever, no matter how often it’s disproved. This is how they came up with the notion that Brad Torgersen is in an interracial marriage to disguise his racism, or that Sad Puppies is about pushing women and minorities from the ballot, even though the suggested authors include both women and minorities. And I’m not sure what has been said about me. Echoes have reached back, such as a gay friend emailing me (joking. He’s not stupid, and he was mildly upset on my behalf) saying he’d just found out I wanted to fry all gay people in oil and that he needed a safe room just to email me from. Then there was the German Fraulein who has repeatedly called me a Fascist (you know, those authoritarian libertari—wait, what?) and her friends who declared Kate and I the world’s worst person (we’re one in spirit apparently) as well as calling me in various twitter storms a “white supremacist” (which if you’ve met me is really funny.) A friend told me last week that he defended me on a TOR editor’s thread. I don’t even know what they were saying about me there. I make it a point of not following all the crazy around, so I have some mental space to write from.

However, enough people have told me about attacks, that I know my name as such is tainted with the publishing establishment (not that I care much, mind) and that some of it might leak to the reading public (which is why G-d gave us pennames.)

This, however, including my blithe decision to change names if needed, gets called paranoia in a professional field that seems increasingly less professional and more devoted to hunting down and punishing wrong think.

And once this has been repeated enough, the feeble of mind will believe it because “everybody knows.”

This feebleness of mind was in stunning display recently in the Facebook page of one Irene Gallo, Creative Director at TOR. (I hope that’s an art-related thing. Or do they think authors need help being creative?)

Note that those statements are so wrong they’re not even in the same universe we inhabit. Note also that when she talks about “bad to reprehensible” stories pushed into the ballot by the Sad Puppies, she’s talking about one of her house’s own authors, a multiple bestseller, and also of John C. Wright who works for her house as well.

Note also that when one of my fans jumped in and tried to correct the misconceptions, she responded with daft cat pictures. 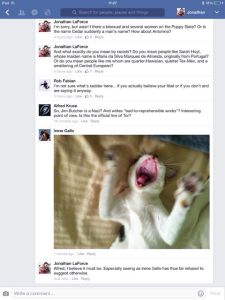 Note that confronted with the total bankruptcy of their beliefs, and their massive “so wrong it’s not even just wrong” prejudices, they choose to wonder how many fedoras their questioner has. Because you know, fedoras are the hat of evil, or something.

Note that this is an “argument” by SUPPOSED adults, with years of experience in the field.

This is the level of reasoning in the publishing houses that aren’t Baen, and the reason why it’s so easy to besmirch someone’s character and it used to be easy to make sure someone who was less than VOCALLY enthusiastic about your rightthink ideas would never work in publishing again.

Fortunately those days are past, and the Irene Gallos of the world, with their easy-bake-oven brains can no longer control who makes a living in this field.

And fortunately we now have proof that the whispers in the dark went on. In the age of the internet, what used to be whispered in the dark is now shouted from the rooftops.

And what I want you to consider is what her shout from the rooftops betrays.

Let’s say that her diatribe said instead, referring to the puppy-kickers “they’re socialists, communists, Marxist academicians who pushed bad to reprehensible works onto the ballot.”

Can you imagine that said, aloud? I can’t. Look, my field has a “young communists club” that writers advertise themselves as belonging to. Supporting the philosophy that killed 100 million around the world is a-okay in the field. And those things are not insults, but reasons to promote an author.  The sentence above wouldn’t even make any sense to most people who work in publishing houses.

Meanwhile anyone who opposes them gets called a neo Nazi (yeah, you know, the libertarian branch of the neo-Nazis), tarred with racist-sexist-homophobic, no matter how ridiculous the idea is and writers such as Jim Butcher and Kevin J. Anderson get called “bad to reprehensible.” When in fact all it means is “these writers DARE not push OUR political agenda.” All it means is “badthink, badthink, badthink.”

This is what is being shouted from the rooftops. THIS is the political climate in my field.

Paranoid? Oh, h*ll no. I was ready to walk away four years ago and never look back. No paranoia when you can be free of the whole mess at any minute.

Thanks to indie and Baen I don’t need to. And if those fail, there will be other works and other names.  They can’t stop us.

But beyond all that, it’s not paranoid to point out that in this field, in this time, in this place, anyone to the right of Lenin gets called names and treated as a pariah.

And that’s on display right there. The feeble of mind don’t understand the difference between “disagrees with me” and “is evil.” And they feel free to display their ignorance and their blinkered prejudice because everyone they know, all the “right thinkers” in their field approve of those same blinkered prejudices.

There was no medieval village so insular as the publishing establishment in NYC who thinks that the rules of their village and tribe are laws of nature.

Thank heavens the control exerted by those feeble of mind people over our careers is less and less with each passing day.

Paranoid? Bah. Angry as h*ll and not taking it sitting down anymore. Because we don’t need to.

503 thoughts on “Shout it from the rooftops”