Okay, to everyone out there, celebrating the fact that all the Nebulas were won by women, and hardly mentioning the stories but only that “Squee, they were written by women!” I have one question to ask:

Do you hear yourselves?

Let’s turn this around. Let’s say that all the Nebula Awards this year were won by men and that men were out there celebrating “Take that, biatches, we showed those women that their science fiction writing sucks.”

And of course you’d think that they only voted for these guys because they’re male.  I mean, that’s all they’re celebrating.

How does that sound to you, good?  An attractive image?

No? Shocking.  I wonder now if I can make it clear in another way.

And right now you’re stomping your foot and saying “We’re nothing like that.  You totally misunderstand, because you see, there was this great matriarchy when everyone — even guys — was perfectly happy:

And then men revolted against this perfect rule, and instituted patriarchy.

But wait.  If the matriarchy was so perfect and stuff, how come they revolted?

Right…. if you’re done with your fairytale, which, let me point out, is a less compelling narrative of Eden and the fall of humanity.

There is absolutely no proof of any primitive, lost in the mists of time matriarchy.  Sure there are female goddesses, but Greeks had those, and they sure as hell weren’t matriarchal.  In fact, save for isolated, special instances in small tribes there is no primitive matriarchy. Because when you’re living close to the bone and wrestling a living from nature with your bare hands, brute force is the only force, and men have more of that than we do.

And how in heck do you believe that back when all humans were scattered in small groups they were all ruled the same way?  Did it come over the internet they didn’t have?

Or do you think females ruling is “natural”?  It’s not natural among the great apes our cousins.

But let’s suppose there really was a great matriarchy where women ruled and everyone was happy, way back before history, where you can’t be proven wrong.

And that evil men broke it.  You do realize those men would have been dead A LONG TIME, right?  And that men today were not responsible for breaking your matriarchy.

So what’s wrong with men in positions of power?  Oh, right.  They have penises.  Which don’t monologue.  (Thank heavens.)

But Sarah, you say, the problem is that they created this structure where only men can win.  After their perfidious revolution they took over everything.  Look how they kept women down for centuries.  Centuries I tell you.

Oh,, people of vaginitude, newsflash.  For most of those centuries, everyone was kept down: 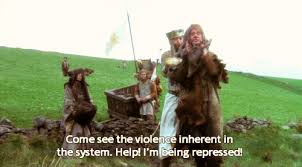 Everyone worked harder than you when you wrote your dissertation; they ate less than you do on a diet, and men and women noblemen and serfs were all kept to strict, oppressive roles.  Because this thing we have called technology wasn’t around.

So, what you are saying in essence is that a system in which only women are allowed to rule is inherently fair, because supposedly the ancient matriarchy was divine.  But a system in which only men are allowed to rule is inherently unfair.  No?  How not, if none of the men alive today caused the problem?  It must be because men are inherently inferior to women, right?  When it comes to governing, right?

Because of course, when we write about the organs of government THAT is what we mean, right?

You might want to take a good look in that mirror:

Because what you’re looking at is someone who hates and despises half of humanity because these people — through no fault of their own — were born with outies instead of innies.

But — you say — the Nebulas aren’t about ruling the world, only proving that women can write science fiction.  And that they’re as good as men and stuff.  Women won totally on merit.  Because they’re just that great at writing.

(It’s very easy, btw, to kick white patriarchy in the balls.  Now, try to do that to the tan patriarchy of the Middle East — which is real patriarchy — and you might find yourself stoned to death.  And we don’t mean with pot.)

Actually, if you had voted for stories, not what was between the legs of the writers, you wouldn’t have engaged in end-zone victory dances about how cool it is that women won all the Nebulas.

You wouldn’t have done that, because it wouldn’t matter.  (And if you knew anything of the history OF YOUR OWN FIELD you wouldn’t think women have ever been kept out of it — and you’d realize they certainly aren’t kept out of it now!  Most editors/agents AND writers are women.  The bad old days of patriarchal oppression are a myth in your own head.  Geek guys always fawned over geek girls.  Oh, and speaking of oppression, try writing an action character who is a straight male, and watch what you get called!)

It might warrant a passing mention “Oh yeah, it’s all women.  Cool.”  But it wouldn’t be a full flutter party with the most important thing celebrated being that the writers are women.  Which means you couldn’t care less what they wrote, provided they have the magical vagina.  Because vaginas are all important.  And not having them makes you evil and bad and oppressive and also a bad writer.

And frankly ladies — oh, sorry, this is offensive, right? — frankly , Sluts, after the tantrums you’ve been throwing, disgusting half the people (male and female) who used to be part of the association that controls the voting, (Only members of SFWA vote for the Nebulas)  you don’t even look like that KKK rally.  What you look like is this:

You seem to have forgotten that writing isn’t about social work, or affirmation, or feeling good and it certainly isn’t about curing your inferiority complex towards males. (And why you should have one is beyond me. Some males are better than I.  Some females too. What do you think is the magic of penis, that I should feel inferior to it, and try to put down those who have one?)  Well, it can be about all that, if what you’re writing is inspirational chicken soup for the feminist soul stuff.  But if you’re writing fiction, the purpose is telling an interesting story, which entertains the public, which will then buy the story and give you money.

If you can sneakily hide a message in the story they buy, so that you convey something that’s important to you, yay.  But no one buys writers that hit them over the head and tell them they’re inferior because they have a penis.

An award which is supposed to mean that the story is entertaining, and serve as an assurance of quality to the buying public.  Half of which have icky penises.

NOTE I’M NOT THE ONE SAYING THAT THESE STORIES DIDN’T DESERVE TO WIN AND ONLY WON BECAUSE THE WRITERS ARE WOMEN.  YOU ARE.

You are saying it over and over with your incessant crowing not about the quality of the stories or even how the stories express some essence of femaleness, but about “Yay, only women won.”

CONGRATULATIONS , you poor Marxist-Leninist dupes!  You won.  You won an award which those who voted are ensuring means nothing but that people voted for you because you had lady parts!  Are you proud of yourself?

Carry on you crazy Social Justice Whiners, you!  If you try really hard, there are other things you can make meaningless by disregarding all quality and awarding it to people because of what’s between their legs!

The rest of us are pretty much like this:

But consider that to the public at large it all looks like this:

UPDATE: Welcome Instapundit Readers and thank you to Glenn Reynolds for the link!

294 thoughts on “Nebulizing the Patriarchy”