(Those of you who are writers, if you wish to post your links in the comments OR to send them to Free Range Oyster [his screen name without spaces – at – gmail dot com], he’ll be compiling them for a promo post on Saturday.  It might take a couple of weeks as he’s dealing with life stuff.)

The prequel to this — Witchfinder — has been removed.  I do promise to go through the copyedits as soon as humanly possible and send the advance copies to those who pre-ordered.  You’ll know when that’s eminent because I’ll remove scattered chapters from this blog.  I do hope to manage it next week, but I’m not promising as I’m still finishing a novel under contract to Baen. Meanwhile, if you donate $6 and note it in the field, you’ll get advance-subscribed to this novel.  I do, however, understand it can be a long time to wait, and if you want to, do so.  I will continue to post chapters here, roughly one a week. 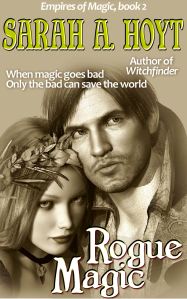 For previous chapters, read here Though you might have to hunt for the last two as I haven’t added them.

Wolfe Merrit, manager of the manufacturies for the Earl of Savage:

I pulled the lady all the way into the undergrowth and hid there, scarce daring to breathe.  I threw my magical veiling ability over both of us.

The thing is that such as it was, my magic was smaller than hers, but I’d been in this situation before, and I knew exactly the kind of veiling that was required to keep creatures made mostly of magic to see us.  Of course, gods weren’t elves, and I hadn’t been even in fairyland, let alone in this place.

I wondered how a place could combine all the disparate myths of mankind and not implode, and I wished – I heartily wished – that I could be reading about someone else having this adventure, far away.  It would seem grand and interesting then, instead of stomach-churning terror.

I wondered how one got out of the mythworld, let alone get out with our skins intact.  There was the descriptions of escaping hades, which perforce must be in the mythworld.  If those were right, there must be a path out, a way to recross the river, or perhaps some large rock we could roll.

I pulled the Lady Helen close to me without even realizing what I was doing.  That she let me, and crouched unresisting next to me, so that I could feel the heat of her body and her form against my chest and thigh seemed a little odd, but not strange.  Force, she must be scared out of her mind.

At least she was not complaining or trying to push me away, which I’d been afraid she would do.

Around us there were sounds of monkeys in the overhead trees, and other sounds that I couldn’t quite identify all around.  There is one thing to say for the mythworld.  Normally, in my own world, I can at least guess “there is a hare” and “that is a carriage passing by” but the sounds of the myth world were all their own.

Oh, there were guesses I could make, like about the sound of the horn and the barking of dogs.  Diana was not about to be beat that easily.  I wondered if she had really been on Earth, pretending to be Betsy the maid, or if Betsy the Maid had been possessed by Diana.  If the later, the Lady Helen and I were bound to rescue the poor thing.  If the first… Wouldn’t the world of men break such a thing of gossamer thought and imagination as Diana the Huntress?  And how could she manage to keep her magical aura invisible, in a household of magic users?

But above all those thoughts and worries there was the memory of what Diana’s hounds had done to Acteon the Hunter.  All right, supposedly his own hounds, but I wasn’t buying that for a moment.

“Her dogs,” the lady Helen whispered, then, limp and warm in my arms.  I tried not to think of her as a woman or as being in my arms.  She was my charge.  Even were she not, there could be nothing between the two of us.

So I said, “Shhh” and thickened the veil of protection over us.  I could feel her questing that, delicately, with her own magic senses, but she said nothing and neither tried to supersede it nor to remove it.

I was afraid my shield would be inadequate, but little by little I heard the pursuit move off.  Not that I trusted it.  Not for a moment.  I clutched the lady to me, and remained very quiet, while her heart beat next to mine.

We might have fallen asleep.  I don’t know.  I kept my eyes closed because anything we were likely to see was an illusion designed to scare us from cover, and she must have too, because she was sensible enough when she wanted to be, but we stayed like that a long long time.

I woke, or at least became aware of myself with a feeling of being cramped in my half-crouch in the undergrowth.  The lady stirred at my stirring, and I opened my eyes half expecting to see Diana’s hounds crouched in a circle surrounding us.

The Lady Helen was opening her eyes at the same time, and all was calm around us, in the deep green undergrowth.  We were under a plant I could not recognize, and there were others of like size all around us.  They looked like onto a palm tree, with the leaves growing right out of the ground.  I frowned at it.  We could probably make our way through the undergrowth, crawling, under these leaves.  The problem, of course, is that we would have no idea where we were going, nor could we see our way until we hit upon something.

The lady moved her lips, asking soundlessly “Are we safe?”

I gave her a little non-commital shrug.  “Perhaps,” I mouthed back.  “or they could be waiting.”

She looked scared then, and darted a look upward at the canopy of trees.

“I think,” I said.  “We must crawl” I dared put a little sound into the words, but not much.  “We must crawl under these fronds and hope we come somewhere we understand, and from where we can decide how to leave this perilous land.  I think it must be like the legends of escaping Hades?”

Her eyebrows went up and she opened her lips, then closed them, then opened them again.  “I see,” she said.  “I’ve for some time now been suspecting we were dead.”

“What?” I so forgot myself I spoke in an almost normal voice.

“Think on it,” she said.  “When do mortals enter the realm of myth?  Only when they’re raised to Olympus or sent to Hades, both the realm of the dead, in different ways.”

The idea so stunned me, I didn’t say anything, sitting there like a gabby with my mouth half open, until she said, “Of course, if that were to be my eternal faith, to transact with the old myths, I wish I could at least have been a constellation.”

The idea was so absurd I heard the chuckle in my throat before I felt it.  “You’d have made an interesting constellation.  The pirate queen?” I said.

She looked surprised then smiled.  “I was hoping for the maiden.”

And then someone cleared his throat near us.  We both almost jumped out of our skins and turned, expecting – or at least I was expecting – to see Hanuman.

But instead the man who stood near us looked little past adolescence.  A very young man indeed, and from the portions of skin exposed between toga and winged sandals, a Levantine or someone of similar complexion.

Sweeping my gaze upward, I met with the expected golden mask.  But the eyes that peered from the eye-holes were oddly familiar.  And when he carelessly reached up and pulled his mask upwards, his face was eerily familiar too.  Not, mind you known, just echoing with familiarity.

I felt both horrified and defeated.  We’d hid so long, and now…  I couldn’t find something to say, but the Lady Helen spoke, “And what do you want?” she said.  “Are you going to offer to marry me?”

He laughed.  The laughter too was familiar. “That would be rather odd,” he said.  “At least for you.  Our rules are rather more…  But no.  I am here to ask you what you want?  If you wish to leave this place, I am the person to guide you.  I am Hermes who walks between the worlds.”

I realized that he reminded me of Jonathan Blythe, but then my mind rejected this.  Yes, somewhat.  There was a faint resemblance.  But the real similarity…

I imagined the preternaturally beautiful face aged, the hair turned white, and I almost jumped out of my skin.  There was no doubt about it.  The golden Hermes looked like none other than the Old Lord, Jonathan Blythe’s grandfather, about whom the most polite thing said was that he was the devil himself.