*This is the new free novel I’m posting here a chapter at a time.  This is pre-first-draft, as it comes out.  It is a sequel to Witchfinder which will soon be taken down (once edited) and put for sale on Amazon (It’s half done.  My wretched health this year delayed everything.  I hope to finish MY edits and cut and add this weekend — I almost made it last weekend —  at which point it will take another two weeks at the editor).  Meanwhile, if you donate $6 or more, I’ll get you a copy of Rogue Magic, once finished and edited, in your favored ebook format.  Of course, if you’re already subscribing to the blog at a level at which you get whichever books come out that year, you don’t need to worry. * 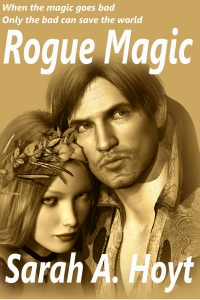 I’d let them change my last name, and I suppose “friend of mankind” was appropriate.  At any rate, we had no last names, and with the herd I’d only been known as Prince Akakios.  And I’d accepted the diminished title that Night Arrow, king of Fairyland, had negotiated with the king of Brittania.

It didn’t matter, at any rate.  I’d known when I left the herd with lady Caroline that I’d never go back again.  The prophecy said that to help restore the true king I must give up fairyland, and I did.  With a light heart?  Does anyone ever give anything up with a light heart when they’ve known nothing else?  All I knew from birth was the herd.  Even before I changed into my centaur form the first time at five, and was taken from my mother to the company of my father’s herd at six, the village was all the wives of the herd, and the children were those who went with me when I was moved to the herd, as same-year-colts and friends and companions.

I made the decision, I thought, with open eyes, but I hadn’t thought through all that it entailed.  No one could.

I know I am lucky to end up with a title and a fortune, but I’d thought that perhaps the Darkwaters would take me into their family circle and treat me as one of them.

Nothing prepared me for this school.

I did not get sent to Eton.  I believe it was well meant.  I was older than most students there, already, and also, I was too odd.

Instead, it was a combination of all three.  Oh, not delinquents as such, but young gentlemen who had trouble accommodating to polite society, sometimes because their parents had only recently ascended to their honors.

It wasn’t hell, exactly, but within a month I’d decided it was one of the antechambers.  I’d also decided first that His Grace of Darkwater could not know what it was like, and then that he probably did, and didn’t realize how hellish it would be for me.

First, because the things I thought were most hellish might not have bothered a normal human.  For instance, the first time I got severely scolded I didn’t realize it.  I got told that my performance in the game field wasn’t “quite the thing” and it wasn’t until the shunning administered by my classmates that I realized I’d transgressed rules by playing as we played in the herd, with full body and full force.  To have to reign in and fit in made me feel awkward, and I couldn’t behave like all the others if I tried.

Second because what made it truly hellish was the confinement.  I knew I couldn’t change into horse form in this world, and therefore must learn to live as a human.  But I dreamed every night of galloping through open fields, of running unhindered for miles, as we had in the herd.  I dreamed of fragrant fields, and I wondered how my orchard was doing back home.

It was as though I were a prisoner in this human skin, and unable to break out of it.

The Duke of Darkwater would see only that there were many boys my age and older, that we were almost all new to the nobility of this land, if not to this land, and that I might make friends.

I hadn’t made friends.  There was a lad who was a lion shifter, and who’d become sort of a protégée, but being 5 years younger than I, he was more little brother than friend.

I’d applied myself to my lessons – even with the herd, I’d been always eager to learn – and tried to get through this as fast as possible.

The one bright spot in this existence, and the reason St. Agur’s had been picked was that Caroline – Lady Caroline, that is, the sister of the Duke of Darkwater – whom I’d met in my adventures, and who was my affianced wife, bound by promise to marry me as soon as we came of age, had been put in a school just down the road.  My school was all male and hers all female.  We got together with her school for dances and picnics, for strolls in the park and for such social activities, so I saw her once a week.  And though I still wasn’t allowed to run, I could always talk with Caroline, and she would always understand me.

I got off my bed, quickly, before it collapsed under my weight, and thanked all divinities that the Duke of Darkwater had paid extra to get me a private room.  I stood, on my four hooves, in the little room, and looked at myself in the mirror.  They’d made me cut my hair at shoulder length, but other than that, I looked as I did when I ran with the herd.

And that was wrong.  There shouldn’t be enough background magic on Avalon to allow me to shift. Wrong in the sense of disturbing, was also the warning that had awakened me, my father’s voice in my head, telling me the king had been replaced and kidnapped or killed by an hostile power, and that my land was under attack.  He said the prohibition on me to reenter fairyland might be moot, but if not, yet I must contact Lord Darkwater and make him help them.  The king of fairyland was Darwater’s half brother.  This concerned the family.  And Darkwater was the king’s Witchfinder, tasked with dealing with all magical problems from other worlds, and this was in his purvey.

This too necessitated Caroline.  But it was the middle of the night.  I could wait till tomorrow and ask for someone to send a message to Duke.  But, other than the sheer consternation at finding me in Centaur form, and perhaps demands to shift back, which I wasn’t entirely sure I could, magic feeling the way it did around me, I doubted they would send a message, or send it soon enough.

The easiest thing would be to take advantage of my own hooves – harder than the ones of Earth horses, and not in need of shoes – and get Caroline, and make it to the Darkwater estate as fast as hooves can carry me.

I looked at my image in the mirror and frowned.  Dark curls, broad shoulders, a bare chest.  The thing was, in the herd, I’d gone barechested, of course.  It was how we lived.  Oh, sometimes we tied on cloth for decoration, or bandoliers in which to carry things, but we didn’t wear clothes unless in human form.  BUT here, if seen running like this through the road, I’d be taken for some wild invader from fairyland.  And besides…  My image looked at me from the mirror with pursed lips, Caroline was a young lady of good breeding.  My bare chest would shock her.

So I opened my closet and brought out a clean shirt, and a jacket.  Stepping as carefully as I could so as not to wake the house, I went to the washstand where a pitcher kept water warm for morning washing up, and washed my face and hands.  I didn’t need to shave yet, which was good, as I didn’t wish to light a lamp.

If you think creeping down a corridor and three flights of stairs on horse’s hooves is easy, you should try it yourself.  There is a reason people rarely ride horses up the stairs or, worse, down them.

It seemed like years later, and was probably half an hour, when I eased the latch on the back door and erupted out into the moonlight.  I was sweaty, shaky, nauseous, and feeling like this was the worst thing I’d ever done, and not just because of the climb down the stairs.  I was very afraid the Earl of Darkwater would disapprove.  But there was no remedy.

I closed the door again carefully, and waited till I was off the grounds and on the road to gallop.  Galloping felt so good I had to force myself into the grounds of St. Claire’s, the girl’s school.

Caroline had shown me the window of her dormitory.  I knelt to pick up pebbles from the driveway and started throwing them at the window.

From the  window came a giggle and something that was not a whisper, though it might have thought it was.  “Oooh, Ainsling.  It’s a centaur.  And he wants you.”