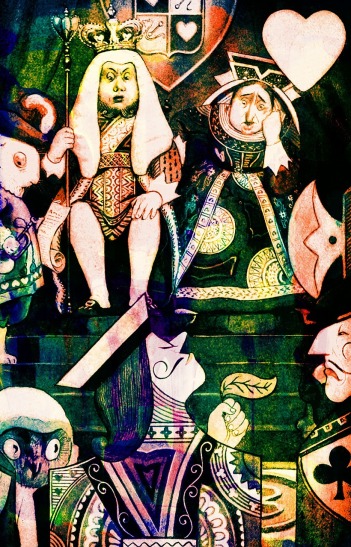 I mentioned D’Haut en Bas as a political strategy here sometime ago, and caused considerable confusion. So I promised to revisit it.

Of course the confusion was probably greater amid those readers who are fluent in French, who were going “what the heck does Sarah mean? Condescension is not a form of government, though I dare say our self proclaimed elites wish it were.”

Right. Look, I haven’t done any serious study of French in… 34, going on 35 years, so I can’t swear this is a fact, but I suspect “condescension” in French as in English only came to have a bad denotation in the last century or so, and before that you would praise someone’s “great condescension” as a positive quality, in that they consented to interact with their social inferiors.

What I do know for a fact is that when I was doing a deep dive into the French revolution (bad idea. It’s depressing. Also, you’ll never get the bloodstains out of your mind) I heard the king’s strategy described as D’Haut en Bas.

And it clicked with what I knew of Louis the XIV who arguably set the patterns of the ancien regime, which still subsisted at the time of the revolution.

You see, in the days of Louis XIV he had problems with the great noblemen.  This wasn’t unusual for France which for vast portions of its history was a set of borders in search of a country. At various times several portions of France showed themselves ungovernable, usually because under the control of a nobleman who saw no reason to obey the nominal king.

At the same time the king advanced (at least some, until, of course they got to big) members of the new French middle class, and raised them up in importance, creating a pincer movement on the big noblemen.

Louis XVI, who was nowhere near as adept, at least for a time trusted the same maneuver would work for him against the nascent and increasingly more rebellious middle class.  He tried to make himself into the protector of the dispossessed, the little people in order to crush the middle class between the royalty and the masses.

It didn’t work. I did say he wasn’t nearly as adept, right. In fact, in many ways Obama reminded me of him.  And in the end, he lost his head.

But take Venezuela for instance (going, going, gone.) The commies got in power by convincing the very poor that the commies would take care of them.  And kept this going for a long long time.  They might still be doing it for all I know. No matter how bad things are, they can always tell the poor that the commies are doing what they can to improve their lives.

But you see, Obama tried the strategy. And I think he still doesn’t understand why it failed.  I know the left alternates between not knowing why the strategy doesn’t work, and desperately trying to create a new underclass so maybe with them it will work.

Part of the reason the strategy didn’t work for Obama is that he is in fact pretty terrible at reading the country. This is because like all Marxists he only admits of reality in order to segment it into proper Marxist constructs.  And if something he sees doesn’t fit into Marxism, he by gum will make it fit, somehow.

So — I swear to you, having met and studied and worked with his kind I’d put my hands in the fire this is true — when he aided abetted (if not suggested that someone start it) and cheered on the Occupy Wall Street movement (the embodiment of his threat to have the mob come for the bankers, after all) he expected that the “underclass” would immediately rise up and cover his astroturf in a verdant coat of grassroots.

I suspect he’s still puzzled it didn’t work and that instead the Tea Party rose up to tell him they were taxed enough already.  You must excuse him, the man has no clue what America is like. Regardless of where he was born, he didn’t grow up here, but worse, he’s never made any effort to be of us.  He probably (like Hillary and her supporters) is probably still spinning over why precisely the people went for the man who promised to bring jobs back over the woman who promised to give them all better and larger welfare.

In nine countries out of ten, the promise of money for nothing (with or without their chicks for free) would have beat the offer of remunerated work.

So, am I saying d’haut en bas can’t work in America?

Well, it doesn’t work as well as it does in the rest of the world. And honestly, thankfully, it works less than it did in the seventies.

BUT, and this is an important but, it sort of works on a very regional basis.  There is a reason that democratic controlled cities — as I was reminded of when visiting Pete’s the other day, as the “homeless” problem has started spreading from downtown — are indulging the “homeless” with all sorts of rules and suspension of laws supposed to accommodate them.

The city government counts on people not realizing that in fact the homeless are not the dispossessed needing more money and city services, but drug addicted, mentally ill, often dangerous individuals in need of far more than money or city services. They also count on people — finding themselves accosted on the streets and sometimes even assaulted by people who aren’t even responding to reality (the homeless in this case, not Marxists. Making Marxists homeless is a laudable goal, though) — demanding that something be done, which allows the city to do more things that bring in more homeless.  And then raising the taxes, to do more things…

The end state of this is Detroit, I think. Or another of the American cities destroyed by socialists. And meanwhile, at the top, the leftists responsible for the debacle, get themselves a permanent position and become royalty.

Thing is, I think the mood is changing.  Only six months ago, I swear every cozy mystery released genuflected towards the homeless, who were always laid off computer programmers, or something.  Now… not so much.  I’ve yet to see a new one where the homeless provide the villain, but… I sense it’s not very far off.

Because here’s the thing with the strategy of d’haut en bas: unless played by a master, sooner or later the bas realize they’re being kept down on purpose to provide shock troops to en haut.  And then there’s hell to pay.

And most of our left aren’t masters. Most of them (partly, granted through an excellent education that tainted their world view with a dirty patina of Marx) aren’t competent to find their own *sses with two hands, a seeing eye dog and the latest model GPS.

And their idea of “the people” is — to put it mildly — deluded.

In these conditions, and with the media no longer serving as a shield, fooling some of us some of the time is a stretch goal. Mostly they hope to convince us to stay quiet and play along. Which is why the latest incarnation of d’haut en bas is a reach for the eternally unemployable malcontents cosplaying at “heroes” and heroines of social justice.

That is working as bizarrely as you’d expect, because of course these poeple have to step ever more to the left and demand ever more radical solutions.  You see, they aren’t poor, and they want to feel important and radical. Hence, their leader, Occasional Cortex.

Don’t let the chorus of ignoramuses silence you. Our would be rulers think they’re playing three-d chess, but in reality, they’re just a pigeon, sh*tting all over the board and declaring victory.

In the end we win, they lose. Because we wouldn’t know bas even if we were it, and as for haut, the bastage ain’t been born whom we’d consider above us.  And they don’t know what to do with that.