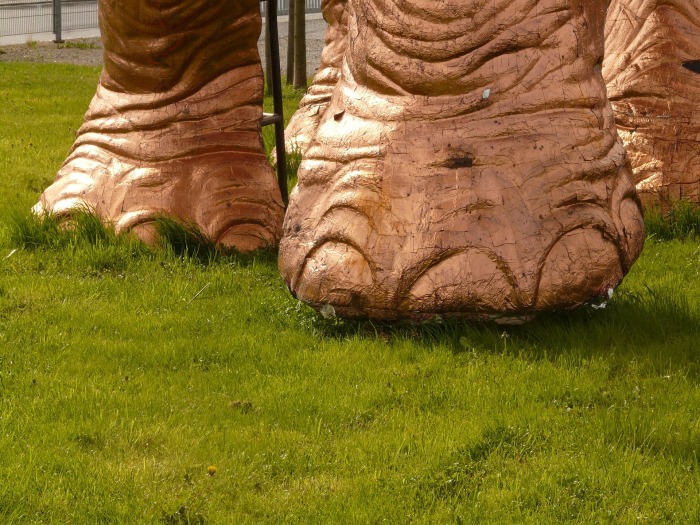 The left has lost their bloody minds.  No, more than usual. You see, having lost control of the information stream, they are now trying to stampede us in the direction they want us to go.

Obviously their only knowledge of stampedes is from the lion king, and they didn’t spend their childhood watching cowboy movies, so they neither know how uncontrollable stampedes can be, nor the essential rules of creating the stampede:

1- To create a stampede you must have full control  of the situation.

2- You must know the “cattle” you’re stampeding.  For instance, stampeding elephants can be difficult because they are smart animals. (Coff.) And if you’re a city person from Europe who knows nothing about elephants and tries to stampede them, you’re gonna end up flat.

I woke up this morning with the phone ringing. When you’re someone my age with aging parents, and particularly when it’s been a week of deaths and bad diagnoses, this is a really bad moment.

As I sleepily reached for the phone, a million scary things went through my head.  This wasn’t improved by seeing younger son’s number, he who was born with a heart defect.  But the “emergency” wasn’t, and son only called me at that hour because he weirdly thought that I would be awake for other reasons.  That was his confusion.

The reasons he called me was the following: one of my posts had not only been removed from a Facebook backroom, but the mods had been alerted the post was removed for “trying to coordinate harm”. 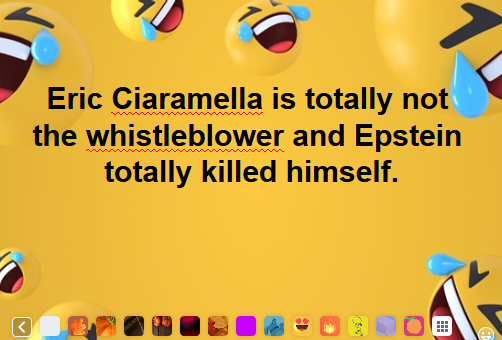 Of any of you can figure out which harm I’m trying to coordinate and with whom — Adam Schiff, perhaps — you know more than I do.

BTW and in passing, I LOVE the Epstein didn’t kill himself memes.  Are they getting tedious?  Kind of.  OTOH they are legitimate popular insurrection.  They are us waving the flag in the faces of the idiots and going “We can see you.”

I won’t go on whether Epstein deserved to die or not, because I don’t think we have the death penalty for under age sex slavery.  He deserved to be locked up.  But the rest of us know he died so the Empress can run for president again.  And we want to make sure they know it too.

Other things we need to start screaming about is motor voter and vote by mail. They need to know they’re not invisible.  It’s the only hope we have of avoiding blood on the streets at this point.

BUT back to the meme above: Obviously it was throw away snark.  So what do they mean with “trying to coordinate harm?”

Well, there’s only one logical route to THAT.  It goes like this:

We know Eric Ciaramella IS the whistleblower (duh, duh, duh. Everyone does, guys) and we know that Epstein was killed so Hilary’s candidacy can live.  Therefore when this person says this, she wants the same thing to happen to Ciaramella that happened to Epstein.  Which is ridiculous, since I — thank heavens — am not Hilary Clinton.

I mean, I completely get if they’d marked my post as fake news, but even that is not justifiable because, well, Ciaramella is not really a whistleblower. He’s an unindicted conspirator in the world’s stupidest attempted coup — which really makes me think that “national intelligence” is a gross misnomer when it comes to the US agencies — and … no, wait, Epstein DIDN’T kill himself.

There might, of course, also have been a trigger on the name of Eric Ciaramella, because the frigging idiots THINK they can keep it secret, after Schiff for brains forgot to redact it.

The utter mendacity behind that scheme becomes crystal clear now that we know who this guy really is:

– Ciaramella is a long-time associate of senior staff for Adam Schiff;

– In 2015 and 2016, Ciaramella worked on Ukraine policy with Biden and never raised a peep of alarm over Biden and his son’s obvious influence-peddling operation there;

– He was an Obama holdover on the initial Trump NSC staff, led by deep state snake H.R. McMaster, serving there until mid-2017 when he was revealed to be a serial leaker of classified information;

– While working at the NSC, Ciaramella was in fact instrumental in creating the false “Putin fired Comey” narrative that helped create the rationale for appointing a special counsel;

– Instead of being fired on the spot, McMaster intervened on his behalf and sent him to work at the CIA;

– Ciaramella was not on the July 25 call between President Trump and Ukraine President Zelensky, and has zero first-hand knowledge of anything that was said on that call;

– All of the allegations made in his false “whistleblower” complaint come from second-and-third-hand hearsay accounts, with much of it very likely coming from fellow deep state functionary Alexander Vindman, who is most likely the second fake whistleblower in this impeachment scam.

Ciramella is, in other words, the classic example of the sort of anti-American deep state functionaries who remain embeded throughout the federal bureaucracy, especially in our intelligence community, Department of Justice and at the State Department. Obama literally filled our government with this kind of disloyal hack, people who have no respect whatsoever for our nation’s electoral process, and who place their their political ideology above the good of the country.

No wonder Adam Schiff, Nancy Pelosi and the disloyal hacks who infest our national news media outlets were so desperate to keep his identity a secret. Paul Sperry and the editors at RealClearInvestigations deserve medals for breaching that wall of conspiratorial silence.

You  can see PRECISELY why they wouldn’t want Ciaramella’s name to be out in the open, right? It endangers their little coup.

Of course, everything endangers their little coup because they’re hothouse flowers.  The conspirators grew up and came of age in a system where the only information flowing to the people was via the press. And the press was a wholly owned subsidiary of the leftist/progressive/Marxist/remnant Soviet propaganda machine.

You know how some novels are awful, because the main characters are stupid assholes, but get away with it because of course they do, because after all, the author is on their side?

Our left came of age and political maturity in that environment. They didn’t have to be good. The author was on their side.  I wonder how much that fed into their impression that the future came with an arrow and their victory was “inevitable.”

Must be a shock to realize that they’re not infallible and that people don’t believe them.  And they’re so stupid they think they can stomp their feet and get us to “shutupshutupshutup.”

Also they have no idea WHO they’re dealing with.  No, seriously. Not one single fricking clue.  They simply don’t know who their opponents are.  They know the straw versions of us, but they’re not even aware those are wrong.

You know when they say we’re racist, sexist, homophobic for instance? That’s not just a tantrum. They really believe that crazy shit.  And if we’re proven not to be, they come up with some psychic bullshit about what we “really” think as though they were in our brain.

I.e. they’ve set themselves up an IMPENETRABLE bubble of unverifiable assertions.

This is not the work of a reasoned, planned, or even vaguely in touch with reality group/faction.  And the only reason they could carry this sort of shit off is if they had total power and were honestly pulling this off in China. (Hence their constant jonesing for China.)

Because one of their things is that they think we’re THEM: i.e. highly social, and raised/conditioned to communitary  action and belief.

When I posted this on FB: 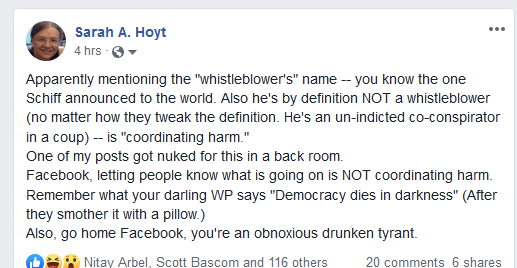 Someone in comments pointed out that the left is complaining that FB is too right wing.

Yeah.  remember how I told you I can see their little coordinated campaigns start (the next one is “we’re running out of water in [some ridiculously short time]” in a planet that’s mostly water.)

Well, their “FB is right wing” is based on the idea we’re just like them.  By doing this, they’re going to convince the right that FB is actually trustworthy to the right.  This will give them back the FB advantage they haven’t had since 2012 (and at that time impaired, since the full advantage was 2008) when people didn’t know they were playing with what you could see and trying to manipulate your voting behavior.

This is not just bloody stupid. This is crazy of the first order. Because anyone over 30 who is not leftist is used to reality-testing their perceptions and isn’t going to believe the leftist drumbeat anyway, except for looking at them, scratching our heads and going “They really are nuts.”

Dear left: you’re not going to stampede us.

All you’re doing is destroying our opinion of your sanity and intelligence.  And that was already low.

These are our middle fingers.  You still have the advantage of millions of fraudulent votes, sure, but you can no longer shape opinion.  And at this time if you continue trying to stampede us, you just might find the elephants have turned around, and you’re going to be flat.

284 thoughts on “Stop Trying To Stampede Us”