Sunday Book Promo, the I Guess You Slackers Are Writing Again at Last (Like I Should Talk) Edition

“Trumplandia is like nothing I’ve read before – hilarious, dystopian porn!” – Patrick Courrielche, co-creator of Red Pilled AmericaWhat happens when the wokest folks you know go on a road trip through the reddest of Red States in search of the Promised Land?45’s election didn’t just upend every talking head’s political predictions, it shredded the very fabric of space-time. The United States of America have become the Disunited States of Trumplandia, plagued by bizarre cryptids, Cthulhu megaliths, and alternate reality wormholes, all crushed under the tiny orange fist of the President Who Must Not Be Named.Fed up with the Fanta-Faced Führer’s fascism, a caravan from the Unitarian Universalist Church of the Lightbringer seeks asylum in the Free Republic of California: a progressive paradise that waits with open arms for anyone brave enough to make the journey west…and survive.

These are their stories. 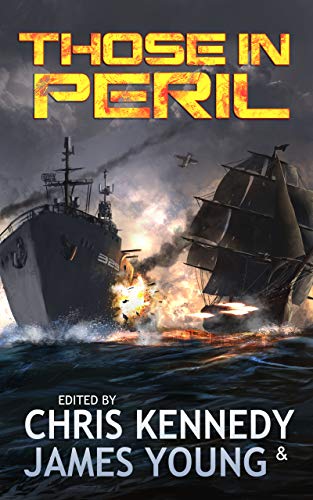 EDITED BY JAMES YOUNG (AND I’M ONE OF THE AUTHORS, WITH POSSIBLY THE WEIRDEST MIL ALTERNATE HISTORY EVER): Those in Peril (The Phases of Mars Book 1)

btw, I’ve been invited to the next one, and they’ll let me play with Richthofen.  So, you guys better make sure this one does well.

Throughout the human experience, historians have wondered, “What if?” What if Japan had been on the side of the U.S. in World War II? What if things had been just a little different in the Falklands? What if Russia had started World War Three?

Wonder no more, for these questions, along with many others, are answered within the pages of this book. Told by a variety of award-winning authors, like Sarah Hoyt, the 2018 Dragon Award Winner for Alternate History, and Kacey Ezell, the winner of the 2018 Baen Reader’s Choice Award, “Those in Peril,” deals with naval warfare that never happened in our world…but easily could have.

The first book in the exciting new “Phases of Mars” anthology series, there is something for everyone inside! From sailing ships, to steam, to today’s modern aircraft carriers, “Those in Peril” traces several centuries of naval warfare…that wasn’t. From adding a psychic…to making a different choice of friend or foe…to something insignificant toppling a kingdom, this book has it, so come aboard and find out “what if” all of these things had changed history…just a little. You’ll be glad you did!

Inside you’ll find:
Naked by Kacey Ezell
Captain Bellamy’s War by Stephen J. Simmons
A Safe Wartime Posting by Joelle Presby
Beatty’s Folly by Philip Wohlrab
Martha Coston and the Farragut Curse by Day Al-Mohamed
The Blue and the Red: Palmerston’s Ironclads by William Stroock
Far Better to Dare by Rob Howell
Off Long Island: 1928 by Doug Dandridge
For Want of a Pin by Sarah Hoyt
Nothing Can Be Said Sufficient to Describe It by Meriah Crawford
Corsairs and Tenzans by Philip S. Bolger
For a Few Camels More by Justin Watson
Per Mare Per Terram by Jan Niemczyk
Fate of the Falklands by James Young

FROM MY FRIEND MARTIN L. SHOEMAKER:  Today I Am Carey.

REMARKABLE DEBUT NOVEL FROM CRITICALLY ACCLAIMED AUTHOR MARTIN L. SHOEMAKER. Shoemaker proves why he has consitently been praised as one of the best story writers in SF today with this touching, thoughtful, action-packed debut novel, based on his award-winning short story Today I am Paul.

Mildred has Alzheimer’s. As memories fade, she acquires the aid of a full-time android to assist her in everyday life. Carey. Carey takes care of Mildred, but its true mission is to fill in the gaps in Mildred’s past. To bring yesterday into today by becoming a copy. But not merely a copy of a physical person. A copy from the inside out.

After Mildred passes, Carey must find a new purpose. For a time, that purpose is Mildred’s family. To keep them safe from harm. To be of service. There is Paul Owens, the overworked scientist and business leader. Susan Owens, the dedicated teacher. And Millie, a curious little girl who will grow up alongside her android best friend. And Carey will grow up with her. Carey cannot age. But Carey can change.

Carey struggles. Carey seeks to understand life’s challenges. Carey makes its own path. Carey must learn to live. To grow. To care. To survive. To be.

Your writing prompt this week is: rail.