I did my graduate work in spotted variable stars at Vanderbilt University, so in the astronomical community I would be considered a variable star astronomer. Based on our experience, many variable star astronomers consider the Sun to be at least borderline variable, and I am one of these. In point of fact, pretty much across the board, astronomers dropped the “solar constant” years ago, because it simply wasn’t. (Unfortunately, other disciplines have not.)

I personally have been watching solar activity for many years now and have watched the activity gradually decrease. As a consequence, I began keeping a rough spreadsheet in summer 2016 as I watched activity begin to drop dramatically. So I have about 2 years of recorded data. It is fairly simplistic, because I only wanted a snapshot and didn’t have time to do more detail, but it serves the purpose, as we will see shortly.

This graph is the latter part of solar cycle 23 and all of cycle 24, roughly to date. (Note, however, that the plot ends in ~March 2018. It’s very difficult to find plots that are current to the month.) The red line is the projected curve. The blue line is the smoothed curve. The purple dots and jagged line are the actual data.

Note that the peak for 24 was approximately half that of 23. Also note that we are currently already as low as the minimum that ended cycle 23, at approximately 8.5-9 years into an average-11-year cycle. Theoretically, we still have a couple of years to go before the actual minimum is reached, though 11 years IS an average.

This next chart goes back a LITTLE farther. This is a view of activity over the last 400 years. Note that this graph does NOT include cycle 24; it stops at 23. Cycle 24 is already at roughly the same level as the cycles found in the Dalton Extended Minimum, and this has been noted by several groups with experience in the field.

This is a clipping from a Michigan newspaper which was sent to me a couple of months ago. Note the article date written in the margin. 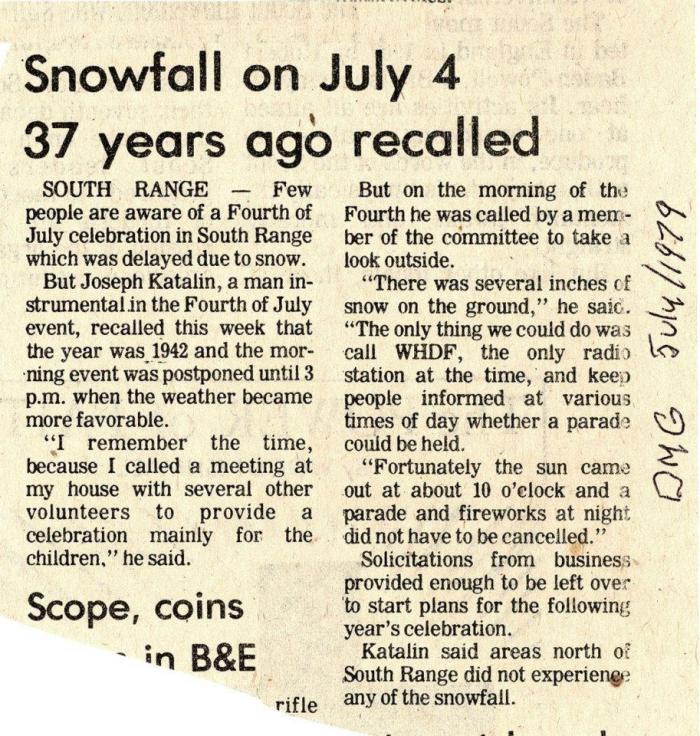 Correlate this to the very low peak of solar cycle 20, which occurred during the 1970s. Note the snow event in 1942, in the cycle subsequent to the diminished cycle 16. Also consider the “Little Ice Age,” which was a prolonged cool period (~1300-1900) overarching the four back-to-back extended minima: the Wolf, Spörer, Maunder, and Dalton Minima (running ~1280-1850AD). Also note the year 1816, the so-called Year Without A Summer, aka “Poverty Year” and “Eighteen Hundred and Froze to Death,” which occurred during the Dalton Minimum (~1790-1830; some argue a later end).

Column 1 is the year.

Column 2 is the month.

Column 3 is the percentage of days in that month with no more than 1 sunspot/sunspot group.

Column 4 is the percentage of days in that month with NO sunspots. 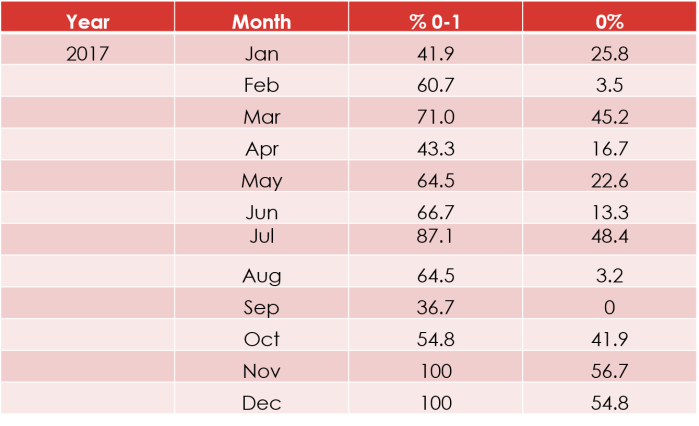 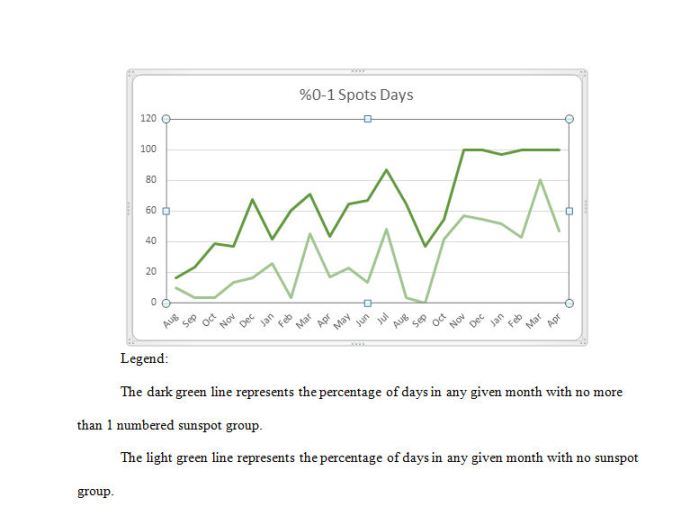 I haven’t had a chance to include the last couple of months of data in the charts as yet. However, in brief synopsis, May had 77.4% of days with no more than 1 sunspot group, and two sets of seven consecutive spotless days. June was much the same, with another spotless week early on; another session of spotless days began June 27th…and continued through the entirety of July. Today, as I write this, it is July 31st, and we have had 35 consecutive spotless days. Since it takes about 24.5 days for the solar equatorial regions to rotate once around its axis, this means that we have seen the entire photosphere spotless; not even the solar farside has spots, and this appears to be corroborated by the STEREO solar observing platforms. A couple of short-lived, almost-spot plages developed during this period, on July 3rd and 21st, but otherwise there were no visible photospheric features. Virtually the only other solar activity came from the enhanced solar wind streams from coronal holes, and even those are diminishing in size and strength.

Sunspots, flares, and coronal mass ejections (CMEs) are all related; flares tend to produce CMEs, and tend to form near spots. This is because they are all magnetic events. A sunspot is believed to be the “snarl” produced in the magnetic field lines as a result of differential rotation — since the Sun is not a solid body, it does not rotate uniformly; rather, it follows Kepler’s Laws of orbital motion. The poles rotate faster than the equator, and the interior rotates faster than the photosphere. But since it is a plasma body, and plasma is composed of charged particles, it generates a strong magnetic field. As this differential rotation proceeds, the field lines gradually wrap up. If (among other things) local inhomogeneities occur, the field strength can vary, and the field lines may “snarl.” But they also tend to move upward as the plasma convects. When the snarls reach the photosphere — the visible surface — they are slightly cooler, hence darker, and appear as sunspots.

But these snarls contain carp-tons of magnetic potential energy. And from time to time, that potential energy manages to release itself, in the form of a magnetic reconnection event. This is, in essence, the field trying to simplify itself and untangle, after a fashion — the field lines break here and reattach over there, in an effort to reshape themselves and eliminate the snarl. This converts the potential energy into tremendous amounts of other kinds of energy — thermal and kinetic, to name a couple — and the result is a flare. This explosive event can — but does not always — then generate the equivalent of a mushroom cloud, which blows off the photosphere into the solar system, accelerated by the reconfiguring magnetic fields. This “mushroom cloud” is the CME.

Given that this differential rotation creates an extremely complex overall magnetic field, sometimes field lines leave the Sun and stretch off — essentially to infinity — in places not normal for a typical dipole (bar) magnet, which ordinarily would mean JUST the poles. These regions of “infinite field lines” are visible in certain wavelengths of light as darker regions, due to the relative lack of plasma in the inner corona, and they are called coronal holes. The solar wind tends to be “enhanced” along these field lines, since the magnetic field is effectively accelerating the plasma in these regions. They are strong, and can create minor geomagnetic storming and aurorae on Earth (or the other planets) if we pass through that enhanced wind stream, but it won’t be as strong as getting hit with a big CME.

Cosmic rays are generally subatomic particles of various sorts, originating from outside our solar system — sometimes outside our galaxy. They are extremely energetic and are produced by the more powerful cosmic objects out there: pulsars, magnetars, supernovae, black hole accretion disks, even quasars. They can be dangerous precisely because they are so energetic, and often if they hit an object, they produce a cascade of additional particles. (In atmosphere, this is called a cosmic ray shower.)

BUT, since most of them are charged particles — they’d be incredibly hot plasma if you got enough of ‘em together in one place — they can be deflected by magnetic fields. And woo-ha, a moving plasma such as the solar wind constitutes a current, which in turn generates an interplanetary magnetic field! So this magnetic field protects the inner solar system from potentially deadly cosmic radiation. (The term “flux” simply means you’re measuring the number of such particles passing through a given area — typically a square meter — per second.)

So. The stronger the interplanetary magnetic field, the better the protection we have from cosmic rays, and the lower the cosmic ray flux will be.

When the Sun is less active, the slower and less dense the solar wind will be, hence the weaker the interplanetary field will be. 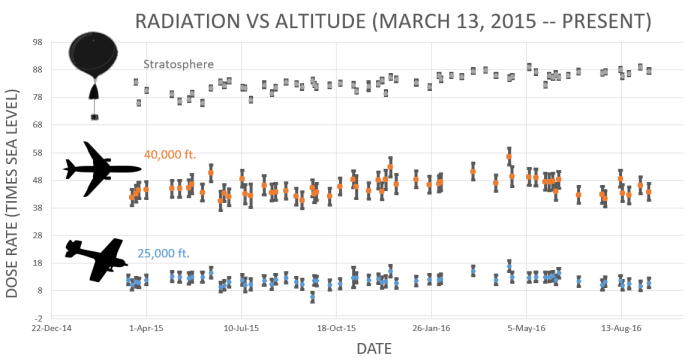 Note: Stratospheric flux tends to be more representative of solar system fluxes than lower-altitude measurements; this is because the atmosphere attenuates the rays. Note how the flux has increased from 78x to 88x that found at sea level.

Based on all this information, it is my considered opinion that we are about to enter an extended minimum, if we are not already in one. The double-dynamo solar model predicted one more solar cycle before entering an extended minimum. However, this model, while able to accurately recreate the shapes of recent solar cycles, has been unable to adequately model historic extended minima. It must therefore be concluded that it is not complete. It is my educated conclusion that it does not go far enough, and there is at least one more dynamo which needs to be modeled. It is therefore likely that the onset and the exit of the predicted extended minimum may be “squishy,” and the dates may vary by as much as a solar cycle or more.

It is very true that “correlation does not equal causation,” but when correlations begin to mount, it is foolhardy to refuse to consider the possibility of a coupling mechanism. To name a few correlations:

Yes, certainly volcanic eruptions and other events factor into the situation. But how many correlations does it take before we need to sit up and take notice? Before we seriously start to wonder what is really going on?

For more on solar activity, check out The Weather Out There Is Frightful, by Stephanie Osborn. https://www.amazon.com/gp/product/B008JA00D0/ref=dbs_a_def_rwt_bibl_vppi_i9

294 thoughts on “A Solar Activity Update- By Stephanie Osborn”