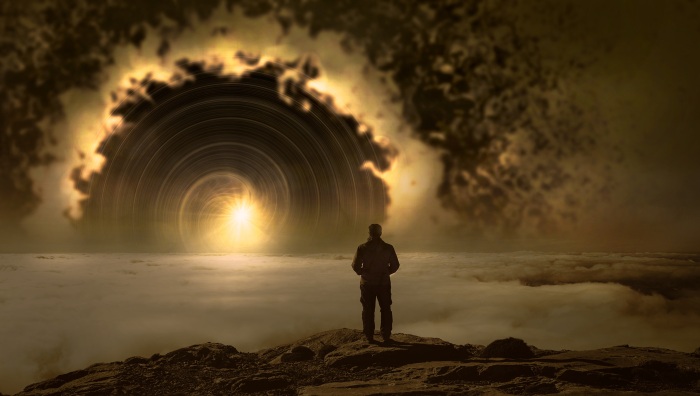 You aren’t G-d, and thank heavens, neither am I.

Not that I’m putting Stranger in a Strange Land down.  on a scale of Heinlein books, we’ll say it was my favorite at 14, not so much at 55, but still, you know, yeah “Thou art God” and all that might have been the zeitgeist of the time (or to quote Heinlein at a later date “what some writers will do for money!’) but Heinlein still missed the most outrageous implications of the idea.

And why should he not?  He was a man who believed in personal responsibility and tending your own garden, and keeping your nose off other people’s gardens, so his Martian who has tumbled on to a modified, collective solipsism uses his powers for good…. ish.  Sure, there’s a lot of mattress beating, but in the end, the “special powers” are used to do things like lose weight, fix one’s life, etc.

Being G-d — note, not godlike, which is more what people try to escape to with super heroes and all that — is rather more complicated a business.  You’d be responsible for before and after, for eternity and its sequel.  It’s a job only an insane person would want.  Unfortunately, a lot of insane people are being thrust into that position.  Or they’re going insane after being thrust into that position.

Not that they’re gods, or heaven have god like powers, but they don’t believe in a power or a reality higher than themselves, which effectively thrusts them into the position of deciding what the rules are, and what the purpose every single day.

Humans weren’t designed that way.  We’re creatures of the band.  Our remote almost-human ancestors would have been born into a rigid hierarchy, because ape bands have a rigid hierarchy.  It can change, but it can’t go away.  We were designed to obey rules and boundaries, learned and instinctive.  And the very keeping of body and spirit together, in more primitive times, imposed an order on a primate’s life, whether pre-human or human.  There was food to forage for, and things to hunt, and young ones to look after, and someone had to look out for the lions.

It wasn’t a wide and  formless chaos in which you didn’t even believe reality existed outside your perceptions.

No, I don’t believe in nobility of birth, which makes me rather mad for an ape.  But I do believe in structures, in order, in purpose.

The difference is that in the beginning of vacation, I had a pile of books I’d been accumulating during the school year, I had walks I wanted to take, friends I wanted to touch base with, stuff that had been waiting to be written.

By the end of that vacation I’d done all that, and it was a formless nothing, broken occasionally with housekeeping duties (they were there at the beginning too, but viewed as interruptions.)  I never liked school much (I liked learning, but remarkably little of it happened at school) but by the end of that, it was a welcome relief, because it circumscribed those wide and formless day in which I, mostly, got sick of myself.

Except for where they give us a framework and a guide to life.  When we threw out all social rules, we also threw out ancient precepts and cautions, things like “if you don’t work, you don’t eat” and “deserving poor” and… and misery or happiness are in your hands, choose.

Instead we replaced them with a lot of nonsense “victim of society” and “no one is ever really guilty” and “Who are we to judge.”

This opening of our minds till our brain fell off left those people not fortunate enough to be raised by people of strong principles floating in a sea of tedium and lack of purpose.  Since the only firm principle they have is that there was never anyone as enlightened or perceptive as themselves, they can’t examine their own beliefs and actions for errors.  They also can’t find reality with two hands and a seeing eye dog, which is why they think reality changes with what you believe, and therefore think that your refusing to engage in their preferred speech, or saying things they don’t like is a literal aggression.  Because they believe words an stories can tear the world apart and put it together in another shape.

It’s not that they’re gods — though they might think they are — but that they’ve reverted to the mind of the primitive savage, unable to connect cause and effect outside themselves, and therefore living in a world they think thoughts or intentions can alter for good and ill: buffeted by the thoughts and intentions of others, looking in vain for the safe room that will allow them to remake the world anew with their thoughts.

They’re savages, in a haunted world, blindly offering sacrifice to forces they can’t understand and trying to think the world in their image and semblance, then finding scape goats when it doesn’t work.  Which is always, because that’s not how this works.  That’s not how any of this works.

Reality is that which doesn’t go away when you stop thinking about it.  It has a power over you.  The actions and wishes of others, both the ones that live with you, and those who occupied this earth for millennia before you were born have an effect on you,  both good and ill.  They discovered things that worked, and things that didn’t.

The perfect communist state is not going to suddenly work, just because you want it to, real hard.

Things like getting up early, keeping healthy, finding an occupation you can work at without too much suffering, looking after yourself and those you are responsible for, keeping a decent and cleanly appearance and space, abstaining from (too many) mind altering substances (well, a glass of wine doesn’t alter my mind.  It does relax my mood.  But that’s me, with my genetics.  Your millage may vary.) work.  They’ve worked … well, since we have records or humans.

What should you pursue?  What will give meaning to your life?

I don’t know.  I’m not G-d.  I do know that for all of us there’s something that’s worth doing really hard.  Whether it’s keeping the most amazing garden ever, or writing books, or simply being the perfect secretary.

As far as I can tell your higher purpose in life should be something that will live after you, to be satisfying.  That can be raising your family, yes, but it can be writing books, crocheting, making quilts, or even just living an exemplary life, which people, seeing, want to imitate.  You won’t see your influence, but it will live on after you and shape the future.  Even if all you do is rescue stray kittens.

And you need companions on your journey, people who will see and understand.

The early left had all this, as they were convinced that they were working towards paradise on Earth, and they were by and large happy individuals.  I think the current left knows their purpose is nihilism disguised as revolutionary fervor.

That doesn’t work, because you start hating yourself and everything around you.

Work for something you think will bring good.  Yes, some of us will be tragically wrong like those early communists (though remembering humans AREN’T infinitely perfectable would have corrected their error) but many won’t, and thus the future becomes better than the past.

But more importantly, you won’t be floating in a sea of lack of purpose and tedium.  You’ll get up to do something which is an ordered endeavor and furthers what you believe is good.  And you’ll have a band, going along with you, and supporting you on the way.  You’ll be a happy ape, whatever else you are.

And so we go, and so things get better. Not from above, by government fiat.  Not because some human who is “a sort of god” can think us all into paradise with his mind, but slowly, incrementally, with the present grounded on the past and the future extending into infinity with promise we can’t imagine.

Now forgive me, I must go, I have my own tree to climb.  Later today I hope to finally catch the short story I’ve been hunting.  And then there’s a novel on the horizon.  It might even turn out to be great.