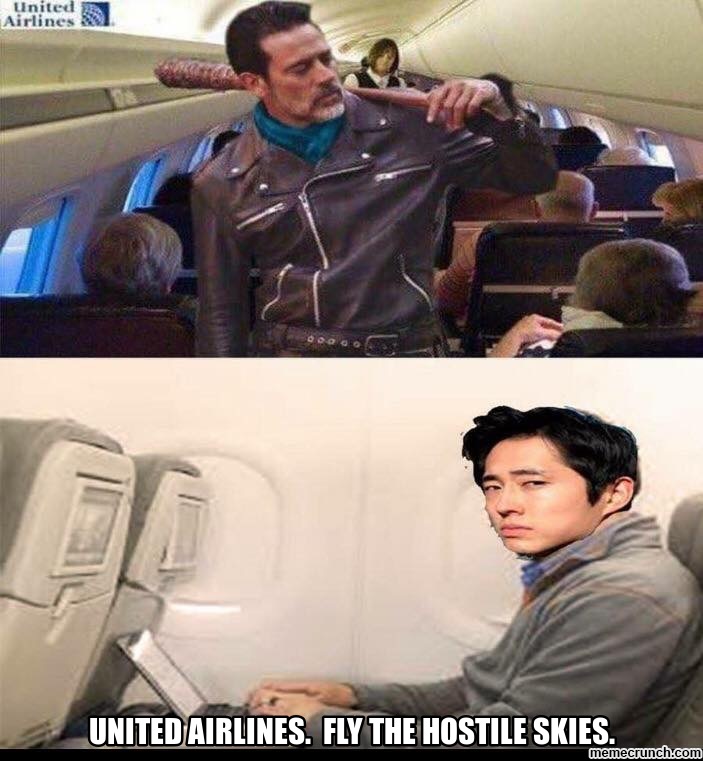 We all know the United Airlines story by now. It’s a tale of woe, of a man trying to get home, an airline at the mercy of federal regulations and just trying to survive the internet mob sicced on it by those silly peons who think they have the right to something if they pay for it.

Yeah, if you can’t tell by my intro where I’m going with this, well, it’s okay, you’ll get it soon and I’ll get a chuckle

I did a post on FB about how the doctor’s past was irrelevant and it blew up, got shared over 20 times (hey, that’s a lot for little ol’ me!) and it really went into the rough in one friend’s share especially. There were a lot of arguments around the whole thing, when I was addressing one part of it, so I’m here to address more of it, especially now that we have more information.

Let’s ignore the end result since technically the cops did it (though United called them in and what they said about why they needed cops could have affected behavior) and say the man was merely hauled off kicking and screaming.

1) Flight was not oversold. United’s carrier contract defines overbooked as too many paying passengers with tickets.

“Oversold Flight means a flight where there are more Passengers holding valid confirmed Tickets that check-in for the flight within the prescribed check-in time than there are available seats.” And “Passenger means any person, except members of the crew, carried or holding a confirmed reservation to be carried in an aircraft with the consent of the carrier.”

Now, technically, this could include employees who were not actually crew on that flight, yes. HOWEVER, this was not a case of passengers with valid confirmed tickets that checked in. The employees were put on the flight last minute, past the valid check in time, and did not have a confirmed reservation, again, this was last minute.

They had employees who needed a ride last minute, without holding confirmed reservations and without checking in on time, which puts them outside the definition. That takes them out of the provisions discussing why you may be booted when they overbook (which I think is BS, but more on that further down.) And, this was employees being put on last minute because something went wrong. Someone screwed up. I don’t know if it was the airline or the airport, but something happened, and instead of dealing with it as their own problem, they made it their customers’ problem.

2) United’s contract talks about when you may be denied boarding, not kicked off. They should have dealt with this before loading people on the plane if they wanted to hide behind those provisions. (Small note, I can no long find the provision, though it was there yesterday. I suspect it is #9, which is deleted right now, probably being updated to cover situations such as this. https://www.united.com/web/en-US/content/contract-of-carriage.aspx#sec1)

3) Yes, they could have done something unusual and sent the 4 in a rental car. I’ve seen arguments saying the kicking off is SOP. Too bad. This wasn’t a standard situation. When you have something unusual happen, like 4 personnel who must be in a place tomorrow and you’re out of seats, you get creative. Also saw an argument that they had union contracts. Irrelevant. That’s their problem. You don’t get to break one contract to fulfill another. No, really, in terms of contract law, not actually a legal excuse. And if the employees threw a fit because they had to drive, then those are some piss poor employees. Which is another reason not to fly them, because they hire/train/create piss poor employees.

5) When they didn’t get volunteers at their paltry (i.e. not the max) offer, the employees started coping an attitude. According to reports, they got mean, snapped at people who asked for them to increase the amount offered, and told people the plane wasn’t leaving till 4 people got off, so basically holding it hostage. And it wasn’t just what was said, it was the way it was said. Like these people were things to be ordered around, herded, bullied. (See where I’m going with this yet?)

6) People keep saying the bumping passengers is normal like that’s a defense. That’s not a defense, that goes to the heart of the problem! The fact that people can argue this was acceptable at all and actually have a leg to stand on is the problem.

Here’s where I’m going to segue into the greater issue this incident has brought to light and my argument for the underlying reason why people are so upset. The reason this has blown up and United is getting dragged through the mud is complicated, and not at the same time, and has a few factors leading to the blow up.

1) See above, the employees handled this badly at every step. This was not one point in time where bad things happened and a guy got bloodied. This was screw ups and bad customer service at every step. Every time an employee could have done something in this situation, he took the path of least customer service. (Bumping passengers instead of reaccommodating employees, getting people on then trying to pull them off, getting nasty with your customers when they aren’t (gasp) giving up the seat they paid for, not raising the bribe to the max allowed, and then, and then, calling the cops on the guy refusing to lose his seat when you could have just went back to offering more, asking for another passenger since this one needed to get home, ect… No, they went straight to, I’m the boss and you need to do what I say or I use force, you stupid little widget) Already off to a bad start, United.

2) People get bumped all the time because airlines overbook. (Again, this wasn’t overbooking here, but in general that’s when passengers get bumped.) So we’re all watching this and are scared because it could be us. Because this is now the norm.

3) Airlines have stopped worrying about customer service because they all have a bad rep and close to a monopoly. I’m already seeing the opinion pieces saying this will blow over in a month or three and it won’t really hurt United overall because people only have so many choices when they fly. And they’re right. Which leads into 4.

Yep, now we’re getting to the heart of the problem. Airlines, private companies, have been told they are “essential,” and are treated as such. They get government subsidies, they get government powers (you have to do what they say or risk legal action), and low and behold, they have started to act like government employees.

And why? Because they no longer consider customer service to be important to getting business, because they have the government propping them up and patting their heads.

Tell me, what other service could get away with this? You have a server toss you out of a restaurant, you go someplace else. You have a retail chain with rude workers, same thing. But airlines do not act this way, nor do they have to.

And we’ve hit the problem. We are no longer customers to them. We are sheep. We are widgets. If they lose our business, oh well, because there’s millions more, and they aren’t going to be gone forever necessarily, because there’s so little competition.

So they’ll ride this out, people will forget, and next time they’re booking a flight, they’ll go with cheapest/most direct/best times, all those other factors, and maybe pick a different airline if all other factors are the same.

And that’s why this has gotten so huge and people are enraged, and trying to ripe United apart. Because we want to make an example out of them. We’ve already gone down the path of being treated like sheep being herded on and off planes, crammed into tiny seats (no one’s making fun of how small I am now, are they? ;), ordered around like we’re prisoners, and if we argue, they have the power to toss us off or even have us arrested.

You want to talk about abuse of power? Give a service person the power to have anyone who pisses them off arrested, and make it so broad, that the absurd result of you being arrested for arguing is no longer hyperbole, but what can actually happen.

People keep arguing the doctor should’ve left when told and dealt with it later because under federal law, the airline employees are in charge and it is against the law to argue with them.

And nobody sees a problem with this? Look at what you’re arguing. You are saying a private company has essentially government power and can abuse it and therefore them doing so is perfectly acceptable.

This has blown up because we have hit a point where we see what happens when this power goes to far. When abuses are not only common, but so common that the fact that it’s common is used as an excuse for the abuses.

We’re blowing up because we don’t want this far of an abuse to become the next thing that’s common. And we know the outrage won’t last, so we’re trying to capitalize on it while we can.

The court of public opinion is trying to make this so painful for United in the short time this is dominating the news that even though it will blow over in a few months, they, and other airlines, will watch themselves when they have this situation again. And hopefully correct their behavior, because we don’t want this to be another thing that is accepted because “they can legally do that,” and “it’s standard practice.”

This isn’t just a reaction to the man being bloodied, this is a reaction to the entire rotting industry that has taken its power, the power as government pets and too little competition, and run with it to run roughshod over the customers. This is a reaction to the people in charge telling us little people to sit down, shut up, take what we’re given, and go quietly to the back of the bus when someone more important comes along.

This is another example of America saying no to the elites, to the cultured, to our “betters” who know what’s good for society. This story has captured attention because it was a man in the modern age being told to go sit at the back of the bus.

This is the public screaming that we are important, the individual does matter, just because the government says you can do this doesn’t mean it’s right, and we can change you.

And we’ll do it one meme, blog post, and FB argument at a time.

And since I’m just a little person trying to make it, here’s a promo of the first book in my cozy paranormal mystery series, just in case this post gets around like my one on FB yesterday, because I’m shameless, and I don’t get government subsidies

Psychic Undercover (with the Undead)