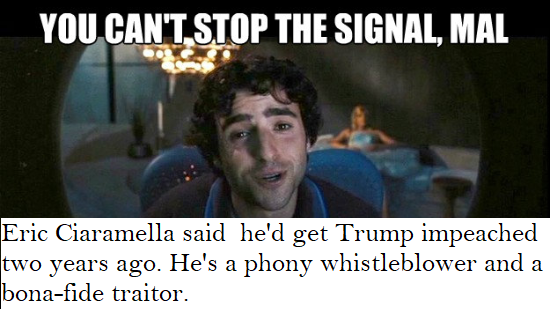 It occurred to me yesterday that all the command and control left are like a dog chasing a car.  They really want to hold the US. But when they get hold of us, they find they can’t and they’re the ones hurt when they try.

I came home to my computer this morning to find out that I’d caught a 24h ban for “coordinating harm.”

Now, by the point I put that up I was just in full rebellion mode. I didn’t verify the statement above, for instance, because I’m just pissed enough.  I know he talked about impeaching Trump way before this and of course he IS NOT an impartial “witness”.  (For one he didn’t witness anything. It’s all hearsay. WRONG hearsay. Which he coordinated with Schiff of the “made up memo read in a hearing” fame.)

And I know the left is making a bizarre effort to protect him, which is enough to tell me that no, this is not a bona fide thing. Then there’s stuff like this.  And this.

And I wouldn’t even be this mad, it it weren’t so fargin stupid.  The son who is all mine, couldn’t be more mine if he’d emerged whole from my head keeps getting this status deleted:

Sure, Facebook is a private platform, but it’s also a public venue, and it should damn well bake that cake already!

Also “coordinating harm” is idiotic. Unlike antifa which does use FB to coordinate harm, I’m just passing on information.  I’m not suggesting anyone do anything to the unindicted coup conspirator Eric Ciaramella. I’m just exposing him as a traitor and a disgrace, which he is. That’s not coordinating harm. Unless it’s the harm the citizens of America could do to the Dems quest for unbridled power.

And by the way, even if Trump were as bad — he’s completely not — as I thought he’d be when I held my nose in November 2016, I’d crawl over broken glass to the voting booth to vote against the outright communists in the Dem ticket.

I’ve seen it, I don’t want it.  We don’t need a third of our population in mass graves. Fuck off Marxists.

These are my middle fingers.  And as for Facebook: BAKE ME THAT CAKE MOTHER POCKERS.

I have a big pocking wrench. And I intend to continue using it.

If you’re on Facebook, please share this on your page. Be assured what shows is the last image.  You see, Facebook decided we could no longer choose which images to show, so now they show the last image by default.  Which is why the last image is as rude as it is.
🙂